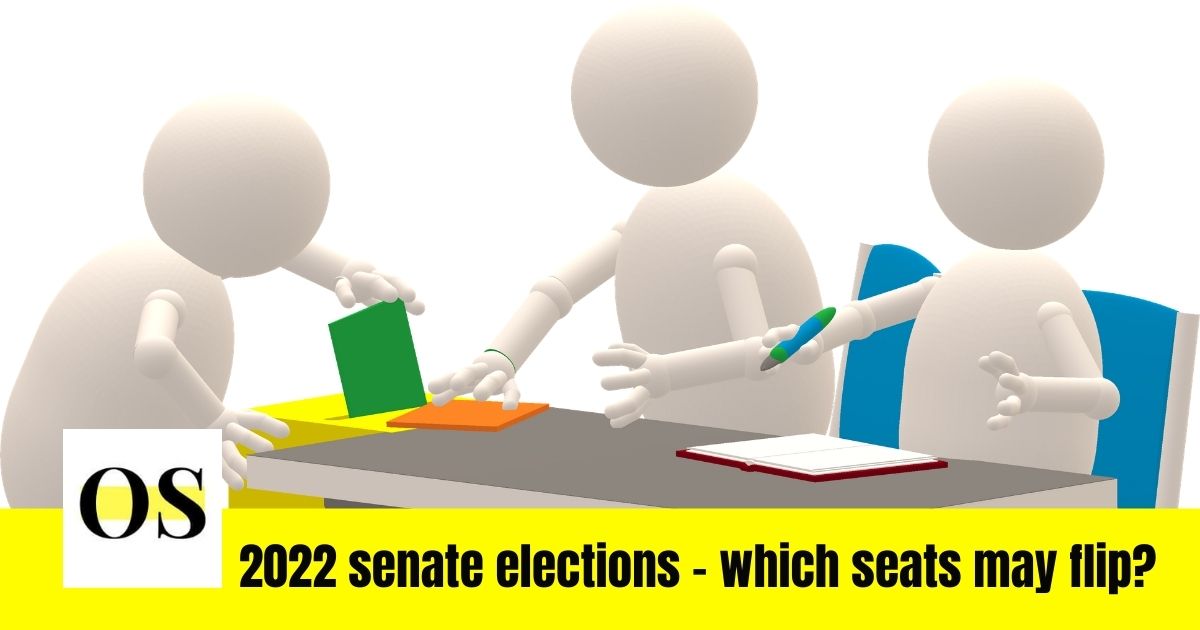 According to CNN, the following 5 seats are in danger during the 2022 senate elections:

Former president Donald Trump’s endorsement of the incumbent likely removes one major headache that Sen. Marco Rubio could have faced: a Trumpier primary challenger, who, at the very least, could have cost Rubio some extra money defending himself, and in the worst case scenario for Republicans, put the seat at greater risk.
However with the former President (and Florida resident) behind Rubio, Republicans feel good about this seat even though Trump only carried the state by 3 points, less than he won Ohio. Rubio has a track record of success here, whereas Democrats don’t yet know their candidate. As a moderate with a compelling personal story, Blue Dog Coalition cho-chair Stephanie Murphy could make this race competitive. She’s considering but hasn’t entered the race yet, and while others could still get in too, the governor’s race may also attract some top talent.

As an open seat that Biden carried last fall, Pennsylvania remains the seat most likely to flip in 2022 with Republican Sen. Pat Toomey not running for reelection. Democratic Lt. Gov. John Fetterman raised about $4 million in the first quarter — an impressive haul for the first three months of the off-year. However, the former Braddock mayor is still going to have competition for the Democratic nomination.
He got a reminder of that late last month when the current mayor of the western Pennsylvania town endorsed one of his opponents, state Rep. Malcolm Kenyatta from Philadelphia, who raised just $374,000 in the first quarter. The field is still growing, with Montgomery County Commissioner Val Arkoosh launching her campaign earlier this month.
Yet another Philadelphia politician, state Sen. Sharif Street, announced an exploratory committee, while members of the congressional delegation, like Reps. Conor Lamb, Chrissy Houlahan and Madeleine Dean, are eyeing the race, although they also have redistricting on their minds and would probably have to forgo reelection before knowing what their House districts look like in 2022. So far, it’s mainly businessman Jeff Bartos running on the Republican side, who raised about $792,000 and loaned his campaign $400,000 in the first quarter, although current and former members of the congressional delegation could still join that contest too, as could several former Trump officials. While Democrats may be contending with a messy primary, they see the wide interest in the seat as a sign of the opportunity to flip it.

Months after twin Senate runoffs here flipped control of the Senate to Democrats, Georgia continues to be the center of the political universe, this time with a controversial election law that has led major corporations to boycott the state and the President to condemn it as “Jim Crow in the 21st century.” While voting rights advocates say the law makes it harder to vote for Black Georgians — a key part of Democrats’ winning constituency in this longtime red state — it may also embolden minority voters to turn out, which has traditionally been a problem for Democrats in midterms.
It could also inspire liberal donors to keep Georgia in their checkbooks, despite the state not being a presidential battleground this cycle. That would all be good news for Sen. Raphael Warnock, who won this seat by just 2 points in the January special runoff election and is running for a full six-year term. He’s already well-positioned financially, heading into the second quarter with $5.6 million in the bank.
However, Republicans argue that Warnock and voting rights activist Stacey Abrams — who may also be on the ballot next year if she runs for governor again — will be punished for the economic hit to the state from corporations siding with their opposition to the law and boycotting Georgia. The GOP field is still taking shape, but this is one place Republicans are on offense where they feel good about a deep bench of potential candidates. Warnock’s opponents from last fall, former Sen. Kelly Loeffler and former Rep. Doug Collins, are eyeing the race, and GOP Rep. Drew Ferguson — a member of House GOP leadership — may also be a contender.

Sen. Catherine Cortez Masto is facing her first reelection. On the Republican side, former Nevada Attorney General Adam Laxalt, whom sources told CNN last month is considering it, is the name everyone’s waiting on.
He’s a former statewide elected official and could gain traction in a state Biden only narrowly carried last fall. Democrats argue, however, that Laxalt would be motivating to voters on the left since he’s been a Trump defender, helping bring various lawsuits over the 2020 election
Republicans admit their chances here will largely depend on what the environment looks like next year. Cortez Masto, meanwhile, fresh off a term as chair of the Democratic Senatorial Campaign Committee, raised $2.3 million in the first quarter and has nearly $4.7 million in the bank.

While the Democratic field may be shrinking here, the Republican field is growing bigger — and messier — as candidates trip over each other to claim the Trump mantle in a state he won comfortably twice.
The most public sparring has been between former state Treasurer Josh Mandel and former state party chair Jane Timken, but there are others who are tying themselves to the former President, too. Businessman Bernie Moreno recently announced his campaign, touting the involvement of Kellyanne Conway and some other former Trump officials.
Businessman Mike Gibbons, who lost the 2018 primary to Mandel, launched another bid. And members of the delegation are still eyeing the race, like Rep. Mike Turner, who recently tweeted a polished bio video. Another big name who could shake up the race is “Hillbilly Elegy” author JD Vance.
If he runs, he’ll benefit from a super PAC that Peter Thiel has already kicked $10 million into. On the Democratic side, former State Health Director Amy Acton, a Democrat who served in a GOP administration, has passed on the race, likely leaving Rep. Tim Ryan — who hasn’t yet officially launched — the biggest name. Republicans are relieved Acton is out and feel better about running against someone with a voting record. Ryan raised $1.2 million in the first quarter — an impressive sum for a House incumbent but less than the impressive sums some Senate Democratic challengers have recently posted.