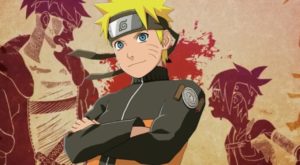 The Japanese manga series that was written by Masashi Kishimoto is Naruto. The Anime Start with a spoiled brat who lost his parents when he was born and hated by all the villagers. For the sake of attention, he started doing mischief. Time passes and he grew up and eventually finds friends and mentors who directed him towards the path of becoming the greatest Ninza of the world. His rival Sasuke Uchiha and crush Sakura form a team known as Team 7. He fights many high-level shinobis and become the Hokage, The leader of the village.