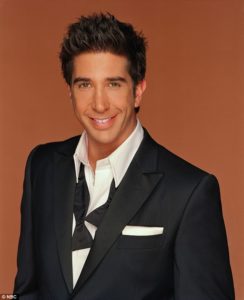 Ross Eustace Geller is the lead character played by David Schwimmer of the famous and popular TV series FRIENDS. The character Ross is considered to be the most intelligent member of the group and is noted for his goofy but lovable demeanor. He married Rachel Green and often considered as the best TV couple of all time.

Your password reset link appears to be invalid or expired.

To use social login you have to agree with the storage and handling of your data by this website. %privacy_policy%