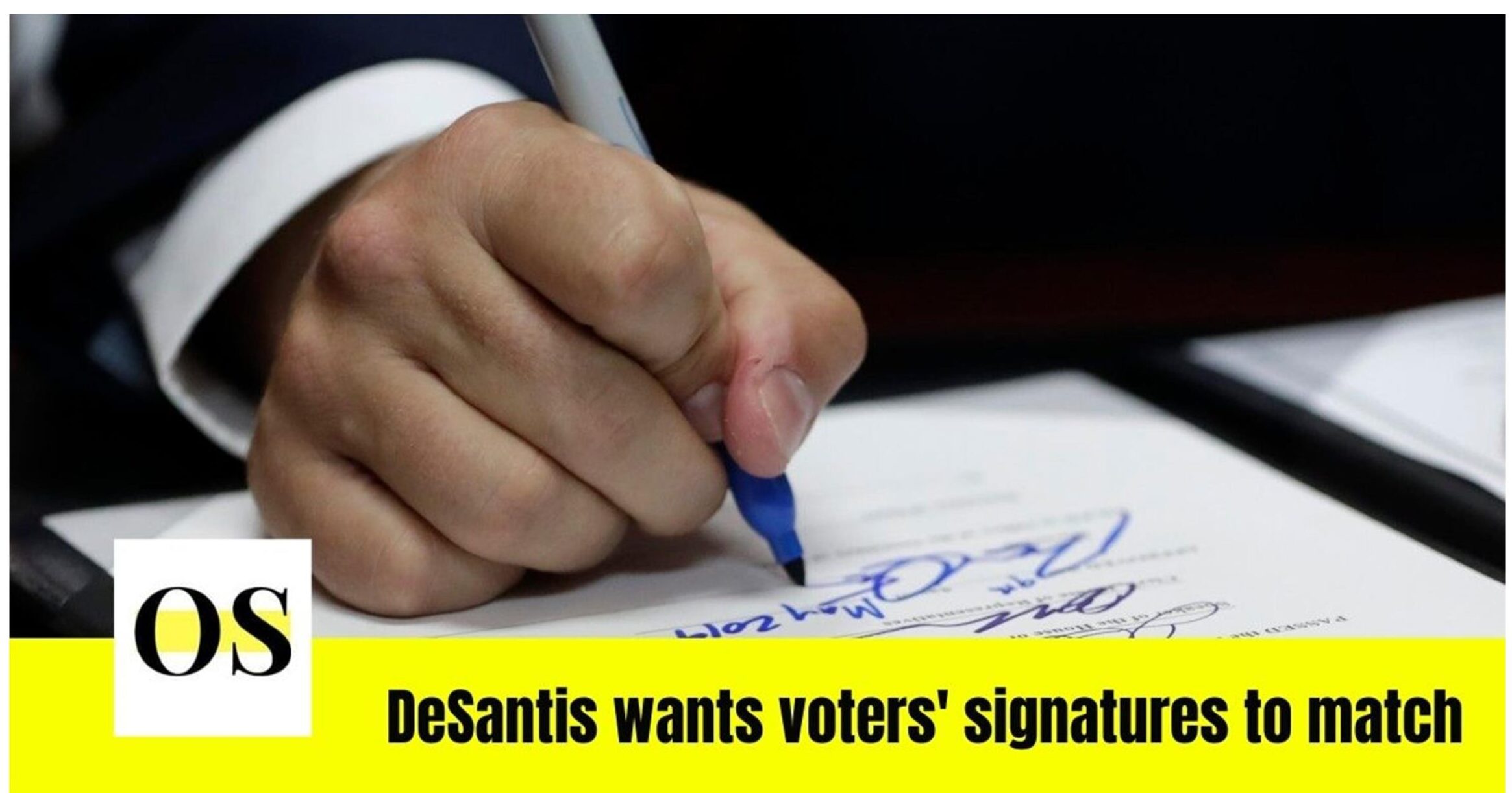 Governor DeSantis’s signature has evolved over time. Yet, he wants voter’s signatures to always be accurately matching.

Governor DeSantis wants to rein in that long-standing practice. Vote-by-mail signatures “must match the most recent signature on file” with the state Department of Elections, DeSantis declared in February. A bill moving through the Florida Senate would make that the law.

Some election officials say limiting signature samples could make it harder to authenticate the identities of voters who choose to cast their ballot by mail.

Signatures change over time, they say, and are often affected by the choice of pen, the writing surface, fatigue, or a person’s health. A new requirement for a one-to-one match could lead to more rejected ballots.

Experts and election officials who reviewed Governor Ron DeSantis’ signature history for the Times said some of the modifications in his penmanship could have posed trouble for election workers, especially if constrained to one point of comparison.

In a handful of instances, it is possible the ballot could have been rejected, they said.

“It shows why it is better to have multiple signatures for review than to have one,” said Tom Vastrick, a forensic document examiner based in Apopka.

The proposal is part of a package of voting legislation that Florida Republicans are pushing this session to the state’s election system, even though DeSantis praised Florida for how it conducted its 2020 election. “The way Florida did it, I think inspires confidence, I think that’s how elections should be run,” DeSantis said at the time.

Daniel Smith, a political scientist at the University of Florida, studies the application of voter signature matching laws. His research has shown counties often apply signature matching rules unevenly, and students and minorities are more likely to have their ballot rejected because of a mismatch.

“It’s really silly you would want to limit the signature to compare,” Smith said. DeSantis’ “own signatures show the reason for that.”

Instead of limiting signatures or relying on a digital facsimile, it would be more helpful to have people sign their name 10 times in ink when they register to vote, Vastrick said.

In response to these concerns, Rep. Blaise Ingoglia last week tweaked his voting bill to allow election officials to use a signature on file from the past four years. Ingoglia, R-Spring Hill, said the limitation is needed “to make sure there wasn’t signature shopping where you would have 20 different signature iterations going back 20 years.”

State Rep. Fentrice Driskell, a Tampa Democrat, said the amended bill is “better than what we had before” but she added: “It’s trying to fix something that wasn’t broken.”

“Our poll workers have been trained to use multiple signatures,” she said, “and it seems wholly inefficient to be changing the procedures for them.”

According to Governor Ron DeSantis,  these measures are needed for election security. He has said less about why he wants to change the signature matching rules.

“If there need to be ways to bolster the signature verification, then we need to do that as well,” he said in February in West Palm Beach.

Smith said limiting signatures could have the opposite effect on election security. Fewer signatures mean less evidence to verify a positive match.

“If you’re interested in election integrity, wouldn’t you want more signatures to validate the one that is coming in?” Smith said. “Unless that is really not your intention.”