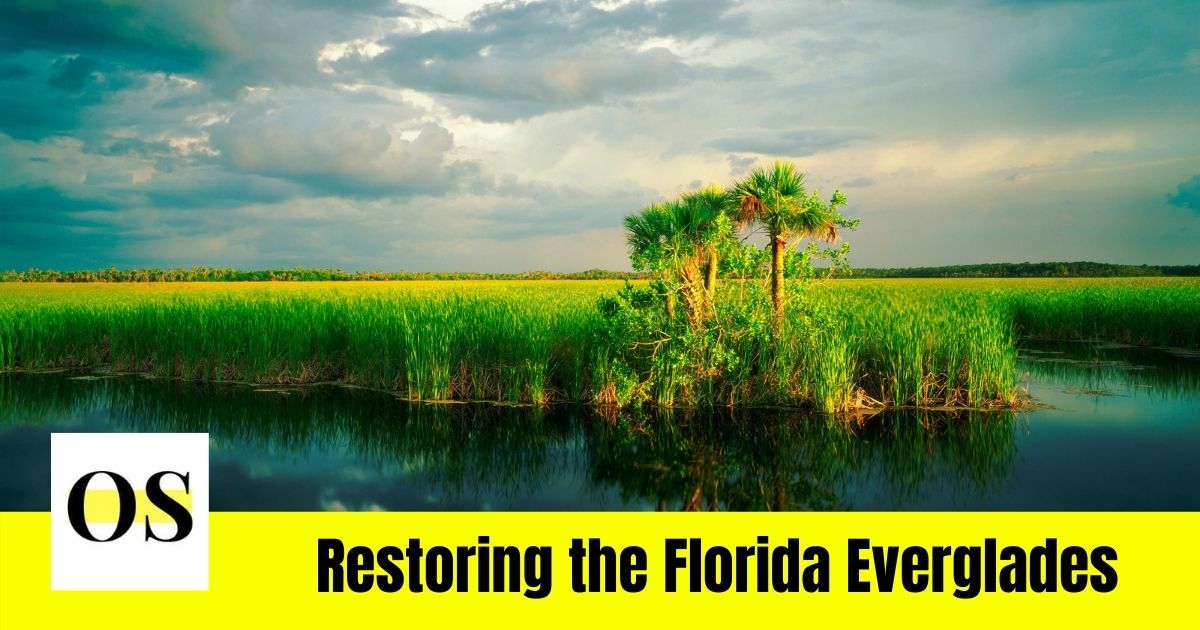 It’s been 20 years since Congress approved the plan to “restore” the Everglades. The plan — behind schedule and over budget — is gathering momentum just as new factors threaten to overwhelm it. What sort of engineered ecosystem will we end up with?

The elements failed to cooperate. An October deluge dumped rain down the white canopy sheltering a score of dignitaries who had assembled a dozen miles out in the Everglades to celebrate two obscure milestones in the multi-billion, multi-decade plan to rehabilitate the Everglades.

As the rain poured down, politicians and bureaucrats extolled the state’s completion of the S-333N, a giant gate-like structure for doubling water flow to Everglades National Park. And they praised a $40.5-million federal contract to fill in an agricultural ditch, build some culverts and put a gap in a levee. It’s the first contract for a suite of major projects that move water south — the “heart of Everglades restoration,” says Col. Andrew Kelly, U.S. Army Corps of Engineers, which oversees the Everglades work.

“Quickly” has been 20 years in the making. Approved by Congress in 2000, the Comprehensive Everglades Restoration Plan (CERP) encompassed 68 components to be completed in 20 to 30 years at a cost of $7.8 billion. The plan includes constructing reservoirs, removing levees, filling canals and building structures like the S-333N. The aim was to restore something like the natural flow of water in what’s left of the Everglades while assuring water supply and flood protection for about a third of Floridians.

Two decades later, the state and federal governments have spent $6.2 billion. They’ve drafted studies and designs, bought land, moved earth, built structures — and completed just one project. “The long and the short of it is, it took longer to get where we are than we all thought it would,” says Shannon Estenoz, COO with advocacy and research organization Everglades Foundation.

Though named the comprehensive Everglades restoration plan, the project covered only part of the Everglades. “It wasn’t even close to comprehensive,” says Gene Duncan, water resources director for the Miccosukee Tribe of Indians.

Nor was it a “restoration” in the sense of returning the Glades to its original state: Half the Everglades is long gone — to development, people, flood protection and farming — and won’t be coming back. ‘Restoring’ what was left meant using engineering and structures to restore function — like hip replacement surgery.

However limited, CERP is the largest environmental restoration ever — pharaonic, one author described it — covering an area the size of New Jersey. Just over half the cost, estimated Conservation International, would be enough to buy and protect the world’s rainforests.

Supporters say delays, both unexpected and unintended, were understandable with such an unprecedented effort. And along the way a host of new wrinkles has emerged. Case in point: Everglades National Park Superintendent Pedro Ramos noted that water meant to hydrate Everglades National Park and Florida Bay was escaping underground to the park’s east. “We’re investing millions of dollars of the American people to restore the Everglades,” he said. “Right now, we’re losing as much water as we’re putting into the park because we don’t take care of that situation on the eastern side of our boundary.” Possible solutions — years away — include constructing a giant underground wall to retain the water for the park and bay.

Other trends cloud prospects for success. Invasive species and human population are growing. The sea is rising faster than planners anticipated. Also, in designing the plan’s devices and works, scientists and engineers pegged rainfall and water flows to the climate from 1965 through the 1990s. Scientists now realize that was but a moment in the Atlantic Multidecadal Oscillation, an atmospheric phenomenon that was in its cold — dry — cycle when planners made their assumptions. We’re now in a 30- to 40-year warm — wet — phase that will leave the Corps and state handling as much as 50% more runoff a year.

Environmental organizations, researchers and government agencies remain broadly supportive of the program, though individuals and groups dicker over particular components. “They’re taking out plumbing and replacing it with plumbing,” says Florida Gulf Coast University water authority William Mitsch, “I guess I’m still not convinced that the 800-pound gorilla of getting lots of clean water down to the Everglades is going to happen.”

Meanwhile, the Corps’ recent Everglades health report card grades the ecosystem a 45 (“fair”) on a zero to 100 scale. “The one-line conclusion from that report is the Everglades ecosystem is struggling even after 20 years,” says Bill Nuttle, an environmental consultant with the University of Maryland Center for Environmental Science. He adds, “if we don’t keep the environment running, South Florida is toast.”

Keeping it running is endlessly vexing. Back in the spring, managers fretted about a scarcity of water after the driest March on record. Then came a wet season with too many days like that of the ceremony. Tropical Storm Eta alone brought a foot of rain. In November, water district chief engineer John Mitnick was saying, “We’ve got more water than places to put it.”

Rising water in the Everglades hit record highs, evoking memories of floods 20 and 30 years ago that drowned animals and necessitated mercy killings of starving wildlife. The recently celebrated S-333N — though meant for use in “high water emergency situations” to prevent wildlife drownings — was closed, forcing water to build up behind it to the north. Opening it would flood 18 homes in a west Miami-Dade community known as the 8.5-square mile area, or Las Palmas, that has complicated Everglades decision-making for decades.

In a typical Everglades twist, the rising water that was life-threatening for land animals was perhaps good news for some wading birds, which historically do well at nesting after washout years. And all the freshwater was great for Florida Bay — hyper-salinity is tagged as a problem there — but bad for the St. Lucie Estuary, which found itself with too much freshwater.

Overall, project advocates say, water quality in the Everglades is improving. The Everglades’ plant ecosystem goes awry if the water contains even a fraction of the phosphorus found in orange juice or milk. In the central Everglades, engineered marshes and ag industry efforts have dramatically lowered phosphorus levels from those of the 1990s. Says Estenoz of overall restoration, “the longer I work on this, the more optimistic I get.”

Other positives: Foundational projects that predate the plan are done or nearly so. The attendees at the S-333N and groundbreaking affair, for example, traveled there over three miles of the Tamiami Trail that’s been bridged so that water can flow freely underneath rather than be dammed up by the road. Some reservoirs are underway. Plus, the government construction schedule shows important work to be finished in the next 13 years. “There is a lot of momentum on some of the major projects,” says the Conservancy of Southwest Florida’s Marisa Carrozzo, co-chair of the Everglades Coalition.

Maintaining the momentum assumes funding. Everglades spending has hit records under DeSantis and former President Donald Trump. Still, federal spending needs to at least double, Estenoz says. Planners want $7.4 billion this decade. Since 2000, the state and federal governments have spent $21 billion on Everglades projects in the 2000 plan and others — about $1,000 for every Floridian. U.S. Rep. Debbie Wasserman Schultz, at the ceremony, urged that “we finish this thing in less than a thousand years because for some of our colleagues across the country — as I always remind my Everglades-focused friends — there are other water projects, big major water projects, lined up behind us, and so the quicker we can get this thing done, the more we’re going to have a chance for our colleagues not running out of patience.”

After the last speaker, the event planners broke the dignitaries into groups. Masked for COVID, they grasped shovels and group by group dashed from under the canopy for a photo of them tossing earth for the first project in the suite of Army Corps central Everglades works. Water drops on the camera lens blurred the pictures.