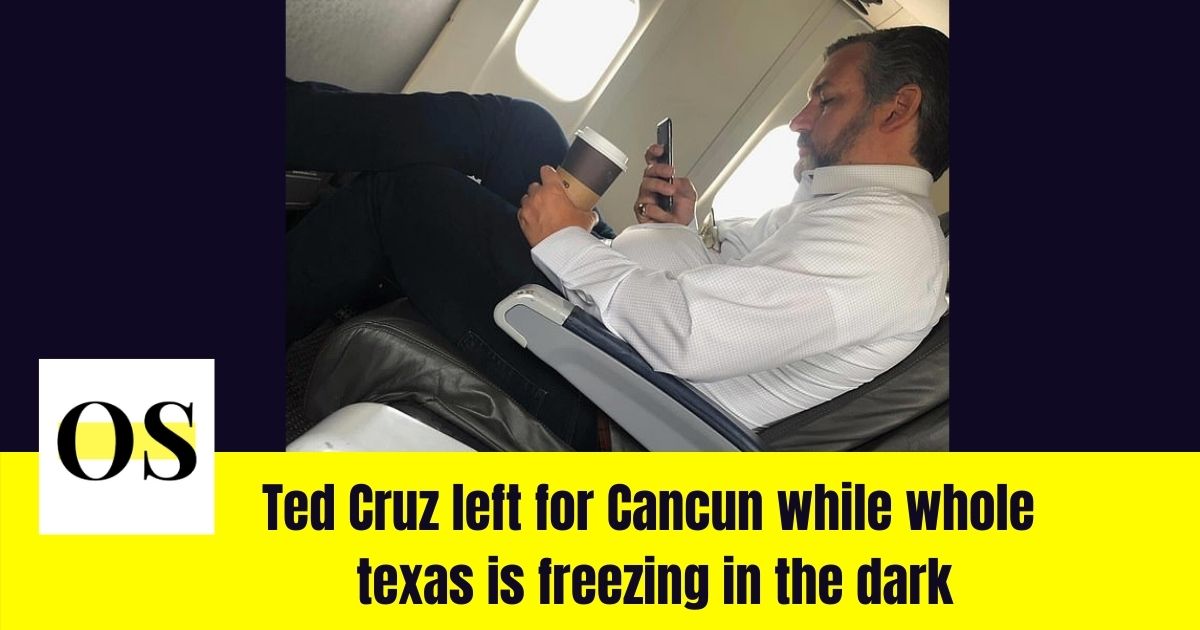 Senator Ted Cruz fled the state in the middle of a record-breaking cold temperature which causes a lack of power and water. Citizens have taken it to the internet by making memes about the situation. Disappointments from the public had risen as Senator Ted flew to Cancun, Mexico for a holiday where his people were left with no power or water.

Cruz later said that he felt bad about making that decision and expressed regret after returning to his Houston home Thursday evening from a trip that has earned fierce criticism on social media and in his own backyard.

“I started having second thoughts almost the moment I sat down on the plane because, on the one hand, all of us who are parents have a responsibility to take care of our kids, take care of our family. That’s something Texans have been doing across the state,” said Cruz.

Cruz said that he planned to work remotely via phone and online and that he never intended to neglect his duties to the Texans. His citizens took it outside his house to express their anger towards his decision. Cruz said that he understands how upset they would be feeling right now due to the decision he took. He also requested his citizens to treat each other with respect and decency and try to understand the situation at this time of crisis. “Of course, I understand why people are upset. Listen, we’re in a strange time where Twitter’s been going crazy and the media is going crazy and there’s a lot of venom and vitriol that I think is unfortunate frankly on both sides,” Cruz said.

MSNBC anchor David Shuster criticized the senator’s decision on Twitter by saying “Just confirmed @SenTedCruz and his family flew to Cancun tonight for a few days at a resort they’ve visited before. Cruz seems to believe it isn’t much for him to do in Texas for the millions of fellow Texans who remain without electricity/water and are literally freezing.” David Shuster’s tweet went viral, garnering nearly 50,000 retweets and more than 70,000 likes as of 1 p.m. ET on Thursday.

Cruz’s former opponent Beto O’Rourke, a Democrat who lost to Cruz in the 2018 Texas race for U.S. Senate, called out his former opponent during an appearance on MSNBC Thursday for “vacationing in Cancún right now when people are literally freezing to death in the state that he was elected to represent.”

Moreover, Trevor Noah commented on this situation on the Daily Show and said that “I mean, look, I get that Ted Cruz is tired. The man deserves a break after trying so hard to overthrow the government, but this is not the time, Ted!”

Photos of Mr. Cruz and his wife, Heidi, boarding the flight surfaced quickly across various social media platforms and left both his political allies and rivals filled with shock at a tropical trip as a disaster unfolded at home. Moreover, text messages were leaked and showed that sent Ms. Cruz hastily planned a trip to Mexico with her friends since their house was “FREEZING”.