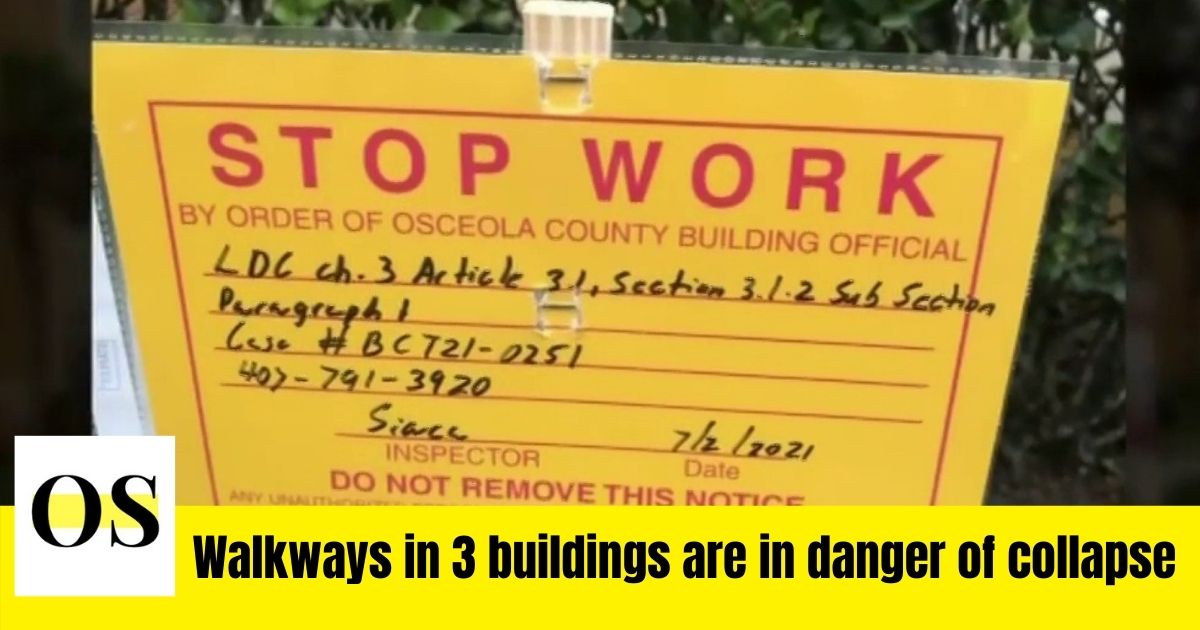 OSCEOLA COUNTY, Fla. –  According to officials, work on dozens of condos in Osceola County that have been declared hazardous has been halted due to permit concerns.

For the time being, the repairs at Images Condominium have been put on hold. On Friday, Osceola County officials issued a stop-work order after the condo association’s contractor failed to pull permits. Officials stated that they want to ensure that the work is done correctly because they are concerned that unregulated labor could exacerbate the problems.

Kyle Beasley lives in one of the risky buildings. He expressed his displeasure at learning of the stop-work order.

“This is similar to a large operation. They should go through the right procedures, and they should be ahead of the game rather than attempting to do things half-way,” Beasley added.

Despite the county’s warning that anyone enter at their own risk, Beasley said he plans to stay in his apartment.

“I’m not too concerned about the structure of the buildings itself because most of the damage is around the walkways,” Beasley said, “but it is still a little unnerving that there is that possibility that it may collapse.”

Three buildings’ walkways, according to the county, are at danger of collapsing.

According to county records, on April 20, 2021, an architecture firm notified the condo association through email that they had discovered damaged pathways and rotten wood frames. These regions, according to the firm, are dangerous.

“Our walkway is tilted; it slants downward, almost at a 45-degree angle,” Beasley explained.

County officials said they will expedite the permission process if the contractor applies, but as of Friday afternoon, no request for permits had been submitted.

Beasley wonders why it took the association so long to start making repairs.

“They should have done this two months ago when they received that information, but they delayed and covered it up with a band-aid. “All I want is for this to be handled as soon as possible,” he stated.

On Friday, county inspectors began checking the other buildings in the complex, according to officials. News 6 is waiting to hear if there was any additional structural damage discovered.

Prior to Wednesday, there had been no code violations registered in the preceding ten years, according to county data.