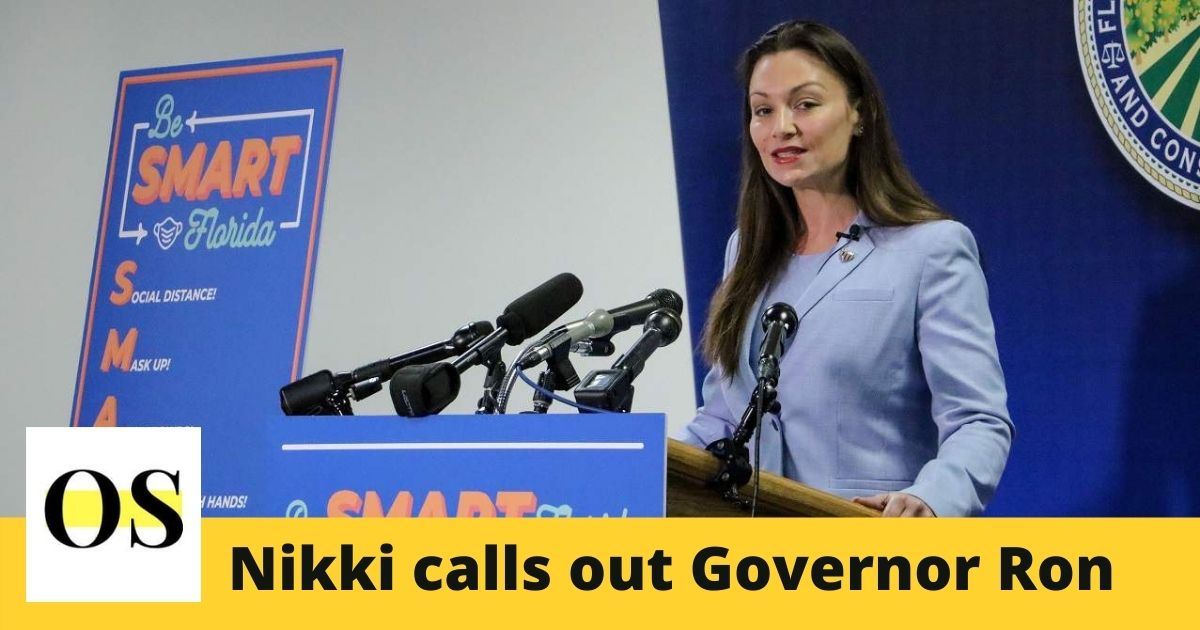 Nikki Fried, has announced a bid to challenge DeSantis for governor in next year’s election by releasing a sympathetic video towards those affected by the Covid-19 pandemic on her Twitter handle. She claims that Governor Ron DeSantis is not empathetic towards the covid-19 victims as she says, “This pandemic has been painful as he lashes out on everyone else like he is the victim, but we all know who the real victims are.”
Even though Nikki Fried did not mention former President Donald Trump by name, she unveils Ron DeSantis’s unwavering loyalty towards Donald Trump.
“Every Floridian who has lost a loved one, lost a job, lost a way of life, this has been so much harder than it had to be, and we know why – blind allegiance to an insurrectionist,” she says. She further says that “Florida can and will do better. Continue to fight for you and hold the governor accountable.”
Nikki Fried’s short clip looks more like a political advertisement as it was paid for by Florida Consumers First, Nikki Fried’s Political Committee. Nikki’s spokesman Max Flugrath said that Nikki Fried wanted to show Florida how she will continue to lead. He further said that Nikki has no intentions of lashing out or contextualizing the Covid-19 pandemic as her political campaign. “Commissioner Fried wanted Floridians to know they have an elected official who has been listening, that she knows how difficult this pandemic has been and feels their pain,” Nikki Fried’s spokesman Max Flugrath said.

Guttenberg, the mother of Jaime, 17 who was killed in the Parkland school shooting stated that Florida would have been at a better place right now if it had Governor Nikki Fried as opposed to Governor Ron DeSantis. She further said that Nikki Fried is the only statewide elected official who has spoken up about the ravages of the COVID-19 Pandemic and that Florida has received a good response from her.
However, the Republicans fired back at Nikki Fried as Joanna Rodrigues, a spokeswoman for the Republican Governors Association said that Nikki Fried is desperate to be coroneted as the Democrat nominee for governor. She further said that Nikki has not made her intentions clear but she is rather hiding behind a veiled announcement video filled with politically motivated lies.
Since Governor Ron DeSantis is a close ally to former President Donald Trump, DeSantis is required to maintain a strategic distance from a genuine essential challenger. DeSantis is supposed to have official aspirations in 2024 if Trump doesn’t run once more for president. However, DeSantis said that he is fully focused on leading the state at the moment and has not yet thought about running for a presidential post in 2024.