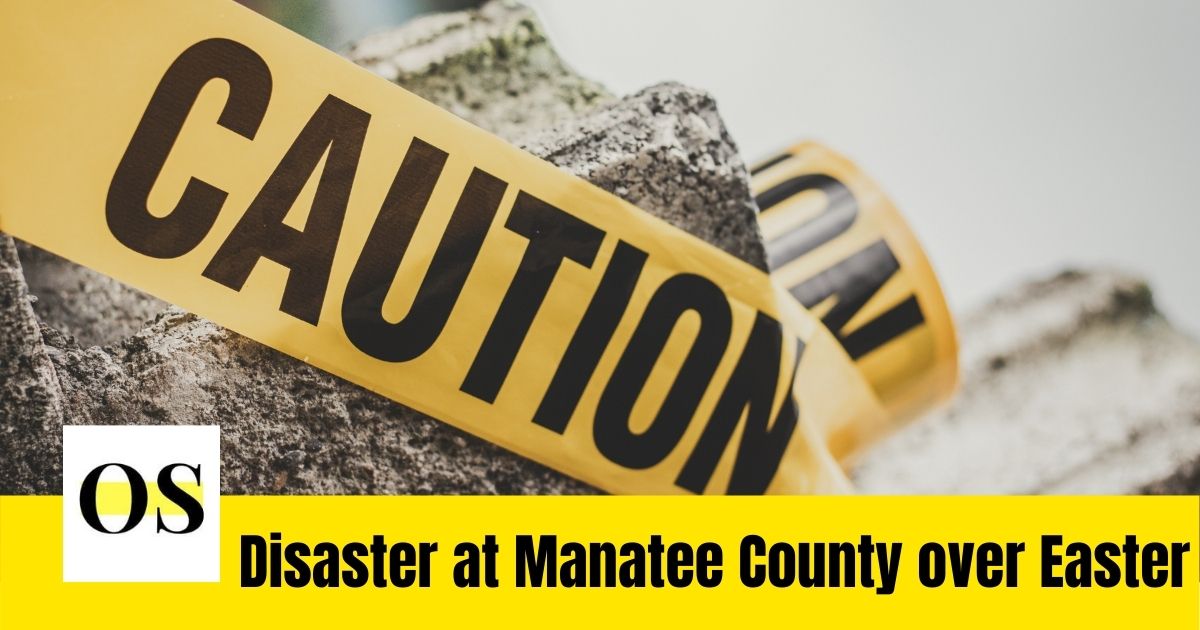 Manatee country emergency call –  Florida over the Easter weekend as residents were evacuated from their homes as officials cited fears that a wastewater pond could collapse at any time. On Saturday, Florida Governor Ron DeSantis declared a state of emergency.

According to county officials, the pond, situated at the former Piney Point phosphate processing plant, has a “significant leak,”.The Manatee County Public Safety Department told people near the plant to evacuate due to an “imminent uncontrolled release of wastewater.”

Manatee Director of Public safety, jake Saur said that “A portion of the containment wall at the leak site shifted laterally signifying that structural collapse could occur at any time.”

On Saturday 11 a.m., evacuation orders were extended to people within one mile north of the reservoir’s stacks of phosphogypsum (a fertilizer waste product) and those within half a mile to the south of the site. Surrounding stretches of highway were also closed to traffic. Phosphogypsum is the “radioactive waste” leftover from processing phosphate ore into a state that can be used for fertilizer, according to the Center for Biological Diversity.

On Saturday evening, Mandatory evacuations were extended an additional half mile west and one mile southwest of the site. Manatee County Public Safety Department said that 316 households are within the full evacuation area.

“In addition to high concentrations of radioactive materials, phosphogypsum and processed wastewater can also contain carcinogens and heavy toxic metals,” the Center said in a statement on Saturday. “For every ton of phosphoric acid produced, the fertilizer industry creates 5 tons of radioactive phosphogypsum waste, which is stored in mountainous stacks hundreds of acres wide and hundreds of feet tall.”

Manatee County Commissioner Vanessa Baugh said in a statement Saturday that the “public must heed that notice to avoid harm.”

Officials are on site conducting a controlled release of water, roughly 22,000 gallons a minute.

The water that is currently being pumped out by officials in order to avoid a full collapse is a mix of seawater from a local dredge project, stormwater, and rain runoff. The water has not been treated.

“The water meets water quality standards for marine waters with the exception of pH, total phosphorus, total nitrogen, and total ammonia nitrogen,” the state said in a statement. “It is slightly acidic, but not at a level that is expected to be a concern, nor is it expected to be toxic.”

Florida Commissioner of Agriculture Nikki Fried wrote a letter to DeSantis on Saturday urging an emergency session of the Florida cabinet to discuss the situation. She wrote that the leaking water is “contaminated, radioactive wastewater,” and noted that this leak is not the property’s first.

“For more than fifty years, this Central Florida mining operation has caused numerous human health and environmental disasters and incidents,” Fried wrote. “There have been numerous, well-documented failures — which continue today — of the property’s reservoir liner, including leaks, poor welds, holes, cracks, and weaknesses that existed prior to purchase by the current owner, HRK Holdings, and exacerbated since.”

On Thursday afternoon, Jeff Barath, a representative for HRK Holdings, the company that owns the site, appeared emotionally distressed while briefing the Manatee County Commissioners about the situation.

“I’m very sorry,” he said. He told commissioners he had only slept a few hours that week because he was trying to fix the situation, and through tears, said he first noticed “increased conductivities within the site’s seepage collection system” 10 days prior on March 22. This system, he said, offers drainage around the gypsum stacks.

He said he immediately notified FDEP of his concerns.

“The water was changing around the seepage. We went into a very aggressive monitoring program,” he said, to find out where the seepage was coming from.

They discovered the south side of the stack system had “increased in conductivity” and that the acidity of the water, which is normally around a 4.6, had dropped to about a 3.5, which indicated an issue.

After a few days, the water chemistry had not improved and water flows were increasing from about 120 gallons a minute to more than 400 gallons per minute in less than 48 hours, Barath said. Last Saturday night, the flow rates increased to “rates that I could not even estimate to you,” he said.

Water was filling the stacks so quickly that the ground was starting to rise, Barath said. This “bulging” was temporarily stabilized but then extended hundreds of feet.

Barath submitted a report to the state on March 26, according to the state-run “Protecting Florida Together,” website, which was created by DeSantis to allow more transparency about state water issues.

“I was anticipating that the gypstack itself was destabilizing at a very rapid rate and recommended that we consider an emergency discharge,” he told commissioners. He said he feared that “overpressurizing” the system would result in “complete failure.”

“I’ve spent most of my days and nights constantly monitoring all aspects of this gypstack system and identifying failure points within it,” he said, noting that failure points were happening “constantly, I mean hourly.”

The Florida Department of Environmental Protection said that it ordered the company to “take immediate action” to prevent further leaks. On March 30, the department said that “pipes at the facility are repaired” and controlled discharges were initiated to prevent any pressure buildup.

However, based on Barath’s testimony at the meeting, the situation was far from over. He concluded his address by saying they were doing “everything possible to prevent a true catastrophe.”

On Friday, another leak was detected in the south containment area of the facility. Despite overnight work to attempt to stop this and other leaks, Manatee Director of Public Safety Jake Saur said on Saturday that the situation was “escalating.”