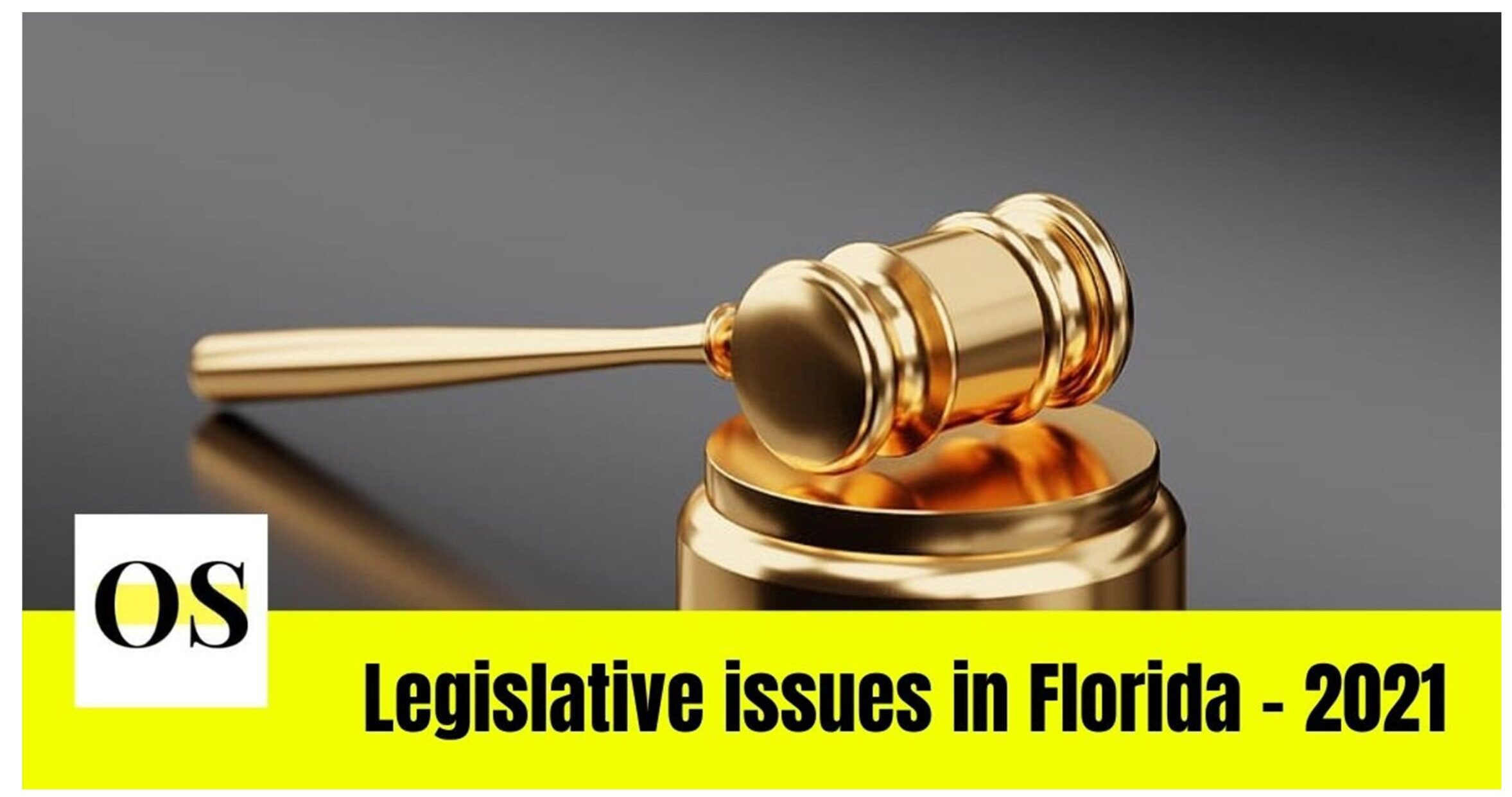 On Tuesday, March 2nd, 2021, the 2021 Florida Legislative Session gets ongoing. Here is an insight into the biggest concerns lawmakers will be working on:

Property Insurance – SB 76 by Senator Jim Boyd, (R-Bradenton) would allow insurance companies to change the way they cover older roofs. Under this legislative proposal, if your roof is over 10 years old and it gets destroyed during a hurricane, your insurance company could pay you what your old roof is worth as opposed to paying 100% of the replacement cost. This, almost the same as the PIP Repeal bill. It can be seen as an attempt to cut down the cost of insurance.

School Funding– Nearly 90,000 students failed to show up for school this year, whether remote or in person. Not all of those kids are “missing.” Some may have moved, and others may have enrolled in private schools. Yet the shortfall has serious consequences for school districts, which get a big share of their money based on enrollment. House Speaker Chris Sprowls recently sent a letter to districts urging them to locate students “and, if they are still residents of Florida, ensure that they are properly enrolled in a K-12 education option allowed under Florida law.”

COVID Liability Protections –Florida businesses and healthcare providers have been pushing for protections from COVID-19 related lawsuits. Now the legislature is poised to give it to them. SB 72, by St. Petersburgh Republican Sen. Jeff Brandes, would make it harder for people to sue businesses over coronavirus infections and related problems. SB 74 would extend immunity for healthcare providers, including nursing homes, from COVID-19 infections. The measure is also sponsored by Sen. Brandes.

Budget and COVID-19—Florida faces a $2 billion budget gap for the upcoming fiscal year courtesy of the coronavirus pandemic. Drastic declines in tourism and consumer spending are causing lawmakers to consider raising revenue in addition to budget cuts. Potential money makers could include requiring out-of-state online retailers to pay Florida sales taxes and raising tuition for public college and university students. There’s also chatter about renewing part of an expired gambling compact with the Seminole Tribe of Florida and some flirtation with online sports betting. Budget cutting areas include education and healthcare—the state’s two largest spending sectors.

School Testing– The coronavirus pandemic led schools to shut down early last school year. Some students have returned to regular classrooms while others are learning remotely. And teachers are trying to teach to both. On top of that, coronavirus outbreaks have led to student quarantines and that’s concerned educators who worry some kids are falling further behind in their learning. Educators are asking that teachers, schools, and districts be held harmless from the consequences of poor test performance, which the state allowed last year. New federal guidance from the U.S. Department of Education.

Medicaid Funding– Healthcare is the largest part of the state’s budget. However, the state doesn’t actually foot all the bills. A significant amount of that budget is built using federal money that comes through the state-federal Medicaid partnership for low-income, uninsured Floridians. The pandemic has swelled the state’s Medicaid roles. Florida lawmakers are considering further reductions to the state’s share of the Medicaid program by tapping local governments to make up the difference in a program that’s used to draw down federal matching funds.

Hialeah Gardens Republican Sen. Manny Diaz is staking it all on his SB 48 to consolidate the programs down to two. But his proposal would also convert the funding for families into education savings accounts which can be used on education-related expenses including college. ESA’s have long been a goal for school choice advocates, but Democrats worry the state’s public schools will suffer as a result of part of the plan that overhauls the way the money is doled out.

PIP Repeal – Lawmakers are considering leaving No-Fault Insurance and moving over to Bodily Injury coverage. This is a hope to align Florida with the 48 other states who currently have a similar system. A provision added would allow insurance companies to offer a policy that includes up to a $200 deductible for windshield repair. This is a move to try and prevent bad actors from offering incentives to customers for replacing their windshield, then file an exaggerated lawsuit to their insurer.

Minimum Wage Implementation – Florida voters approved a constitutional amendment raising the minimum wage to $15/hr. By 2026. The citizen-driven initiative came years after efforts to do the same failed in the Florida legislature. Now Sen. Jeff Brandes (R-Pinellas) is trying to exclude some workers from the pay hike. He’s pitching another constitutional amendment to amend the existing one that would exclude felons and people under 21 from the $15/hr. Minimum wage.

Internet Sales Tax-– Florida lawmakers are searching for spare cash in the couch cushions amid a $2 billion shortfall for the upcoming fiscal year. Now they are eying something long considered off-limits. This could be the year the legislature closes a loophole that allows out-of-state online stores to avoid Florida sales taxes.

Public Record Exemptions– Florida lawmakers are pitching several efforts to curb Florida’s open records laws. Among the notable proposals: an effort by Senator Kelli Stargel (R-Lakeland) to shield the addresses, telephone numbers, and birthdates of current lawmakers and cabinet members. The exemption would also apply to spouses and kids and protect their names, places of employment and schools of attendance. The bill, SB 1488. The First Amendment Foundation is also watching SB 220 which would shield applicants for state university presidencies. Final job candidates’ information wouldn’t be exempt from the state’s open records law. In all, the organization is following more than 90 record exemption bills.

Election laws- Super Voting Sites SB 774, HB 635 Introduced by State Sen. George Gainer (R-Panama City) and Rep. Thomas Patterson Maney (R-Shalimar). Both Bay and Gulf Counties have used super-voting sites on Election Day since Hurricane Michael. Registered voters in the county were allowed to cast a ballot at any super-voting site, regardless of the precinct. SB 90 — Senator Dennis Baxley (R-Lady Lake) is the bill sponsor. It would require voters to request an absentee ballot every year that they want to vote by mail.

GOP vs. Big Tech– Former President Donald Trump was banned from Twitter and the social media site Parler was taken down in the wake of the Jan. 6 insurrection at the U.S. Capitol. That was the last straw for Gov. Ron DeSantis who accuses social media companies of targeting conservatives. There are proposals allowing states to sue social media companies (HB 33) others requiring sites to inform people within 30 days about why their accounts have been suspended or terminated (SB 520) and a resolution asking Congress to repeal Section 230 (HM 101), which gives broad powers to social media companies.

Gambling and online sports betting: Legislative makers are once again looking to gambling revenue—through sports betting and perhaps a new compact agreement with the Seminole Indian Tribe—as a potential solution for their budget woes. Sen. Jeff Brandes (R-St. Petersburg) and Rep. Chip LaMarca (R-Lighthouse Point) have filed bills (SB 392 and HB 1317) to authorize and regulate sports betting. Those bills are both linked to a pair of measures that would create a fee structure for sports betting licenses—leading to a new potential revenue source for the state.

Talks about a new gambling agreement have been in the works since at least 2015 when the banked card game portion of the compact agreement expired. Since then, the tribe has stopped making revenue sharing payments to the state and since a court found the tribe can keep offering banked card games like blackjack without the compact agreement, getting the tribe to sign a new deal and start sending the state money again would likely mean a significant increase in the kinds of games the tribe’s casinos can offer. Senate President Wilton Simpson says talks are ongoing and approving a new compact agreement this session is not off the table.

Environment–Governor Ron DeSantis is pitching $1 billion over four years funded through bonds for state agencies and local governments to shore up their infrastructure against intensified storms, flooding, and sea-level rise. The “Resilient Florida” got a boost from House Speaker Chris Sprowls who made it one of his legislative priorities with a similar $100 million dollar a year push. The difference– Sprowls wouldn’t use bonding as a financing option. Florida lawmakers will also likely spend more money this year on ongoing Everglades restoration efforts, springs restoration, and water quality programs.

HB1 Protest bill – Gov. Ron DeSantis introduced the idea of cracking down on protests amid the summer’s social justice demonstrations. DeSantis said the proposal was aimed at curbing violence and property damage. He re-introduced the bill following the Jan. 6 assault at the U.S. Capitol. “The majority of my bill takes crimes that are already illegal like the following: assault, aggravated assault, battery, aggravated battery, a battery of a law enforcement officer, burglary, and theft and puts it in the context of a riot,” says Rep. Juan Alfonso-Fernandez Barquin, (R-Miami), the bill’s House sponsor. The bill also created a new felony titled aggravated rioting which applies to groups of nine or more. The ACLU and other social and racial justice groups have called the bill an effort to curb First Amendment speech rights.