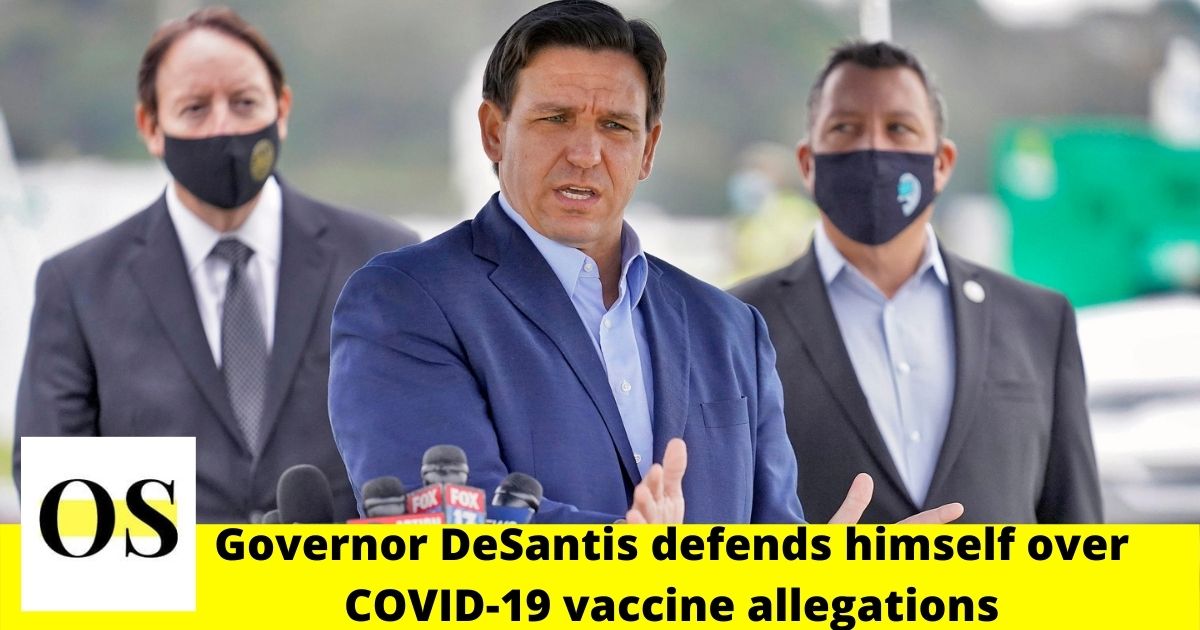 On Wednesday, 17th February 2021, Governor RonDesantis defends himself against those who criticized him about the state’s vaccine rollout on Fox News’ Ingraham Angle with Laura Ingraham.

The Governor made national news for suggesting Wednesday morning that the state could divert vaccines to more grateful counties as the state looks to vaccinate seniors.

“I was criticized by the same types of folks for putting seniors first,” DeSantis said. “Well, guess what. Florida’s seniors are glad that we put them first.”

On Thursday, February 18, 2021, Vanessa Baugh announced that dedicated shipments would serve two zip codes, 34202 and 34211 which led to controversies as those happen to be the wealthiest zip codes in the country. They also lie within Baugh’s County Commission district.

During the morning press conference in Lakewood Ranch, reporters hounded Governor Ron with questions about the local rollout. Manatee County Commissioner Misty Servia, a Republican, criticized the selection of these two areas at a Board of County Commissioners’ work session on Tuesday.

Fox didn’t play the tape on those remarks, but they did show a clip from a Manatee County Commission meeting from Tuesday, featuring Commissioner Misty Servia. In the clip, the Republicans criticized the state for prioritizing the “whitest demographic, the richest demographic” in the county.

“It’s racist to follow the science and vaccinate the most vulnerable population?” Ingraham asked. “I don’t understand this. Now we’re checking boxes of ethnicity and color? I thought it was about the science, saving lives.”

“You’re taking the Whitest demographic, the richest demographic in Manatee County and putting them ahead of everyone else,” Servia said. “The optics are bad … very bad — I’m disappointed,” she added.

DeSantis fired back at the county officials who had concerns with the choice.

“And now all of a sudden someone is telling me that we were able to go in and pull names out — pull a certain demographic out — and say, ‘These are the people that we’re going to serve,'” he added at the Tuesday meeting.

“If Manatee County doesn’t like us doing this, we are totally fine doing this in counties that want it,” DeSantis said at the Wednesday conference. “Most people, I think, will want it. There are going to be folks who complain about getting more vaccines. But I’ll tell you what, I wouldn’t be complaining.”

“We’re going to look to do more and more with the additional doses but anyone in Manatee … if they don’t want us doing it, then just tell us, and we’ll make sure that that that we send those doses to folks who want it,” he also repeated later in the news conference.

The governor also noted that the doses that will be distributed at this location are in addition to the doses allocated to the county as a whole and that he has set up two of these vaccination events every week in places like The Villages, Kings Point, and Sun City in Hillsborough County.

Commissioner Reggie Bellamy, a Democrat, also noted that he’s been “fighting like hell to show people that the (vaccine) lottery is equal and we cannot compromise the system.”

The Governor also repeated a similar refrain, that locking down the economy doesn’t work. All schools open, businesses free to be open, workers guaranteed right to work, and tax revenue higher than expected, DeSantis said. Meanwhile, the state is below the national average in COVID-19 deaths per capita despite having the second oldest population in the United States.