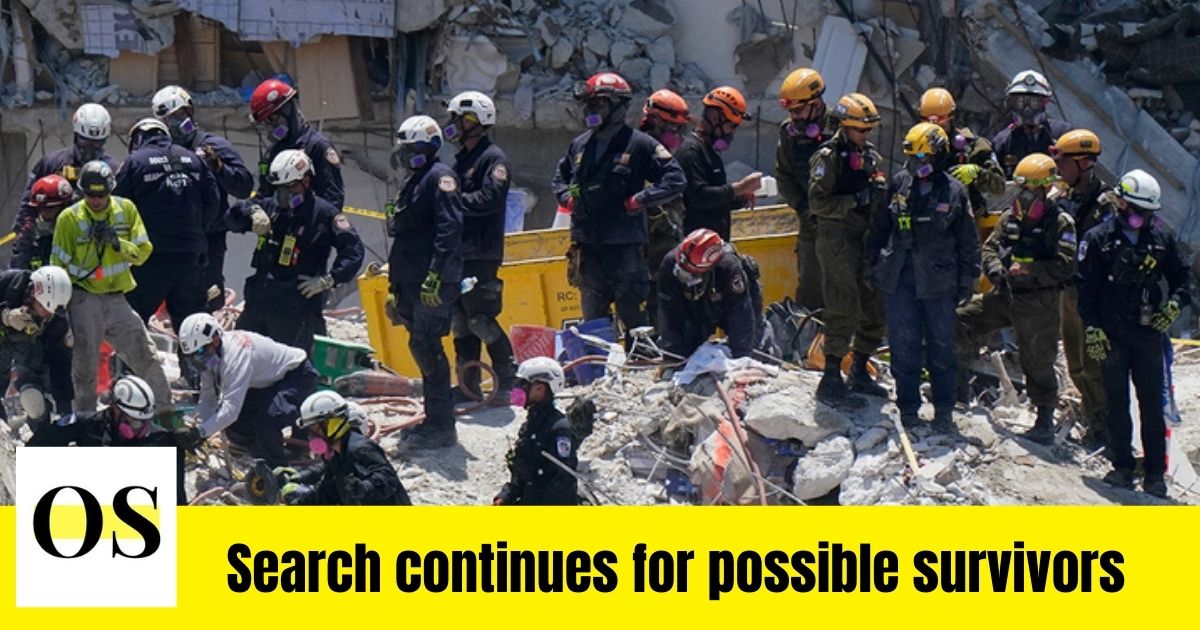 SURFSIDE, Fla. – Following a new investigation, the number of persons missing in the Florida condominium collapse decreased on Friday, but fears of another potentially catastrophic failure grew after engineers discovered unsafe conditions in a different tower and ordered the entire building to be evacuated.

The neighboring community of North Miami Beach revealed that the 156-unit Crestview Towers building was found to be physically and electrically insecure following the catastrophic collapse of Champlain Towers.

“Out of an abundance of caution, the City ordered the building closed immediately and the residents evacuated for their safety,” City Manager Arthur H. Sorey III said in a news statement.

In the aftermath of the collapse, local officials in South Florida and across the state are inspecting older high-rises to ensure that major structural flaws are not being overlooked.

Residents of Crestview Towers were seen outside the building, which was built in 1972, dragging bags and loading goods into cars on Friday evening. Officials from the city tried to assist residents in finding locations to go.

Meanwhile, four more victims were discovered in the rubble in Surfside, including the 7-year-old daughter of a Miami firefighter, bringing the total number of confirmed deaths to 22.

However, there was also a sense of relief. Officials added that a closer examination of the missing persons list decreased the number from 145 to 126 after duplicate names were removed and other residents who had been reported missing came back safe.

“This is fantastic news,” said Miami-Dade Mayor Daniella Levine Cava. Detectives are constantly examining the list and validating reports, she said, so the numbers are likely to change.

When police were able to reach those who had been reported as possibly missing, they discovered that not only they were safe, but so were other members of their families. According to her, this increased the number of persons who have been found to 188 and decreased the number of people who are still missing.

Detectives have been working 24 hours a day, 7 days a week to contact families and others. Officials said that in some cases, the same missing relative has been given both English and Hebrew names.

Miami Mayor Francis Suarez described the 7-year-old who died in the collapse as “a part of our fire family.”

The discovery of the girl’s remains was very difficult for the rescuers, according to Levine Cava.

“For our first responders, it was absolutely different and more difficult. Every day, these men and women pay a terrible human toll, and I ask that you all keep them in your thoughts and prayers,” she stated at a press conference.

The mayor also stated that she signed an emergency order to demolish the remaining portion of the structure after engineers had given their approval. She stated that the order was signed now so that destruction could begin as soon as a date was established. The destruction will most certainly take weeks, according to officials.

“Search and rescue is our primary priority. “We will not take any action that puts our search-and-rescue efforts in jeopardy,” Levine Cava added. “The structure endangers public health and safety.”

Since the early hours after the collapse on June 24, no one has been rescued.

During a meeting with relatives of the missing on Friday, Miami-Dade Assistant Fire Chief Raide Jadallah claimed that during the entire search, only one voice has been heard. On the morning of the collapse, which occurred about 1:30 a.m., a woman’s voice was not heard until approximately 10 a.m. or 11 a.m. Rescuers were unable to locate her, and no additional noises or human sounds have been heard since, according to him.

“The majority of the victims were found dead in their bedrooms, indicating that they were sleeping,” he explained.

Jadallah also warned the families that the search could be halted if Hurricane Elsa, which is now affecting the eastern Caribbean, brings strong winds to South Florida, making the work too dangerous. The search has been temporarily halted multiple times due to severe weather.

“We will attempt to go as long as we can,” Miami-Dade Fire Chief Alan Cominsky said. “You can see from other periods of severe weather we’ve had, we have stopped.”

Some of the rescue personnel who are currently sleeping in tents will be transferred to cruise ships, which will be safer during a tropical storm, according to Jadallah.

The Royal Caribbean ship Explorer of the Seas will be home to almost 600 first responders, according to the cruise line. The ship, which can carry over 3,000 passengers, began lodging rescue teams on Thursday and is expected to continue for the next month.

The news came one day after the hunt for survivors was put on hold for 15 hours due to worries about the structure’s stability. Widening fissures and up to a foot of movement in a big column were discovered by crews.

The cause of the collapse is being looked into. The building’s ground-floor pool deck was resting on a concrete slab that had “severe structural degradation” and required considerable repairs, according to a 2018 engineering assessment. The parking garage also has “abundant cracking” of concrete columns, beams, and walls, according to the assessment.

The president of the board of directors addressed a letter to residents just two months before the building was demolished, stating that structural faults found in the 2018 inspection had “gotten much worse” and that extensive repairs would cost at least $15.5 million. The structure abruptly fell last Thursday, with bids for the work still pending.