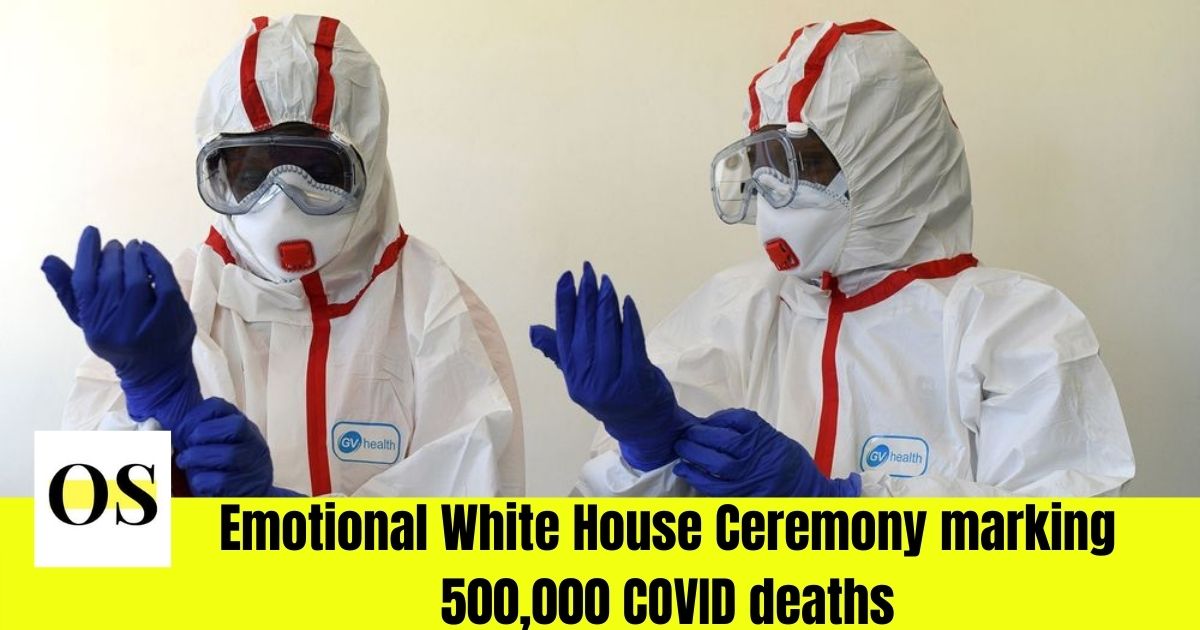 Emotional President Job Biden and Vice President Harris had asked America to “resist becoming numb to the sorrow” on Monday. He said that the novel coronavirus had inflicted by acknowledging the deeply shocking milestone of more than 500,000 Americans dead from the pandemic in a solemn ceremony at the White House.

The country passed the grim toll at 5 pm and bells began tolling at the National Cathedral, resounding across a capital with flags lowered to half-staff. About an hour later, President Biden and Harris, along with first lady Jill Biden and second gentleman Doug Emhoff, emerged from the White House at sundown.

President Biden appeared in the Cross Hall of the White House and pulled a card from his jacket pocket that he said was updated each day with the number of those infected with the coronavirus and those who died of Covid-19. The foot of the South Portico was covered in 500 candles honoring the dead. They listened to a Marine Corps band play “Amazing Grace” as they held a moment of silence.

“We have to resist viewing each life as a statistic or a blur,” he said Monday, in the second ceremony he has held to honor people killed in the ongoing pandemic. President Joe Biden sought not only to honor the dead but also to comfort those who have lost loved ones, many of whom “took their final breath alone.”

“To heal, we must remember. It’s hard, sometimes, to remember,” Biden said on the eve of his inauguration in a similar ceremony at the steps of the Lincoln Memorial. At that time, the U.S. had just marked 400,000 COVID-19 deaths. Remembering, he said, is “how we heal. It’s important to do that as a nation.”

“I know all too well,” he said. “I know what it’s like to not be there when it happens. I know what it’s like when you are there holding their hands; there’s a look in their eye and they slip away. That black hole in your chest — you feel like you’re being sucked into it. The survivor’s remorse, the anger, the questions of faith in your soul.”

The President addressed the survivors directly, alluding several times to the loss of his first wife, an infant daughter, and, later, his eldest son

“I promise you,” Biden said Monday night, as he often does when delivering eulogies and marking deaths, “the day will come when the memory of the loved one you lost will bring a smile to your lips before a tear to your eye. It will come, I promise you.”

He also said that it was a strikingly emotional moment, and a testament to a nation’s failure to act in the face of a calamity that would take the lives of more Americans in a year’s time than those who died in World War I, World War II and the Vietnam War combined. “More lives lost to this virus,” he said, “than any other nation on Earth.”

The White House ceremony was particularly notable because President Donald J. Trump refused to mark the losses or hold such remembrances, knowing that any focus on the individual lives lost would quickly raise the question of how the government failed to respond more quickly and aggressively.