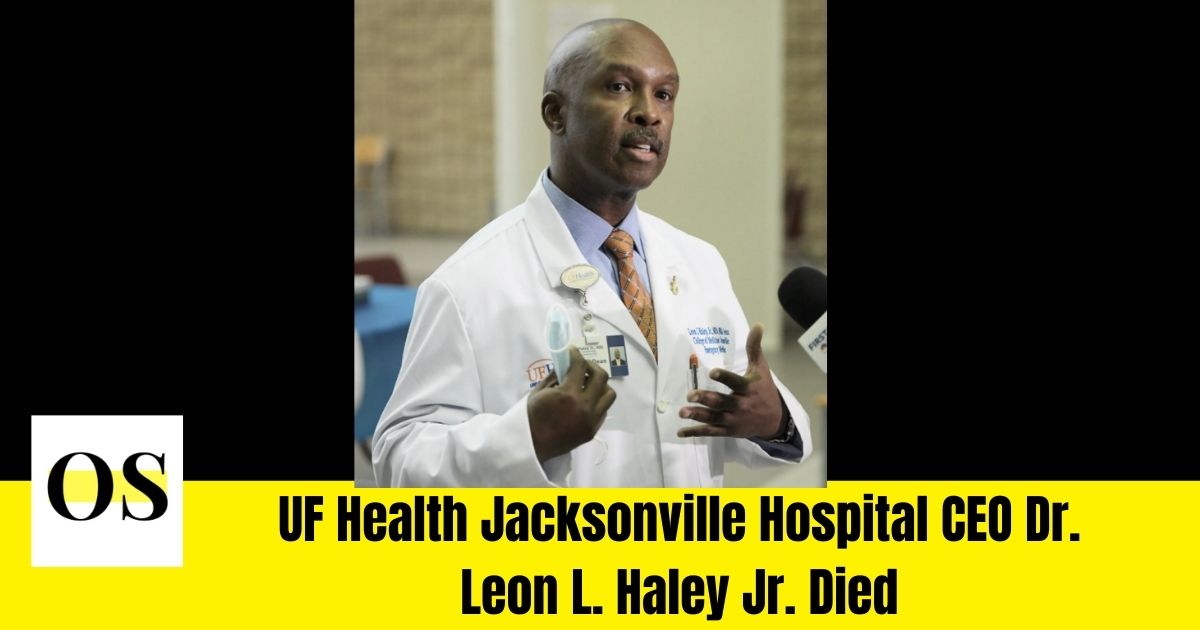 It is very hard to announce that 56 years old, Dr. Leon Haley – CEO of UF Health Jacksonville is no more. He was highly praised for his key role in the city’s COVID-19 response. Died suddenly on Saturday.

According to the Florida Fish and Wildlife Conservation Commission, which is investigating the accident, Dr. Leon Haley died after being pulled from a private watercraft in Palm Beach Inlet. According to the commission, he was “located in the water wearing a life jacket” and was taken to St. Mary’s Hospital in West Palm Beach, but died from his injuries.

The day before his death, he held a conference call with elected officials and community leaders in Jacksonville, explaining that the current wave of COVID-19 cases is showing no signs of breaking.

Dr. Leon Haley had a daughter, Nichelle, and two sons, Wesley and Grant, the latter is a cornerback for the New Orleans Saints.

Here’s the full statement from FWC:

“Dr. Haley was such an incredible leader and colleague to all of us at UF Health, but he was also a good friend to so many, an amazing advocate for equality in health care and most importantly a man of integrity who always wanted to do the right thing,” said David R. Nelson, senior vice president for health affairs and president of UF Health. “This is not only a tremendous loss to Dr. Haley’s family, friends and the people he led at UF, but also to our communities in North Florida and elsewhere around the country. His leadership and friendship will be missed, but we will come together and continue his vision.”

Chad Nielsen, director of infection prevention at UF Health Jacksonville, said on Twitter: “Dr. Haley was an amazing leader and a friend. Her absence will be deeply felt, especially as our hospital grapples with the growth of COVID.”

“I … always felt bad for other hospitals because they didn’t have a man like Leon Haley,” he wrote on Facebook. “While most systems are being run primarily as a business and secondly as a place of care, Dr. Haley … really gave a damn about the health of the community and the hospital’s focus on high quality care. be focused.

“You would be very hard-pressed to find another hospital CEO who spent more and more time in the emergency department, helping to get to know staff and educating residents. With the disconnect that many medical professionals are in the ‘C Suite’ and people Really feel in between. Providing care, that was our secret weapon,” Schmidt said. “Our city, despite its continuing issues with controlling COVID, is deeply indebted to Dr. Leon Haley for putting the issues of infection control and vaccination at the fore.”

Even those who only saw his work were impressed.

“I’ve never had the opportunity to meet this man,” Winston A. Seabrooks said on Twitter, “But… to be a young man growing up in this city and seeing a well-educated black man leading the state’s top trauma hospital exemplify leadership the way he did. That was enough for me to see and note what should happen.”

Dr. Leon Haley first joined UF Health Jacksonville in January 2017 as dean of the University of Florida College of Medicine-Jacksonville. David Guzick, then-UF Health president, told the search committee that he wanted to “walk on a man’s water”. Dean post.

When Dr. Haley was made CEO a year later, Guzick said, “Dr. Haley embodies all these qualities … In less than a year, she has brought such positive energy and expertise to the college that we Felt it made perfect sense for him to lead this great organization, a model that many other academic health centers have structured.”

A native of Pittsburgh, Haley earned her bachelor’s degree from Brown University and her medical degree from the University of Pittsburgh School of Medicine. Growing up, he told Times-Union in 2017, he wanted to become an orthopedic surgeon. But he decided that his personality was better suited to be an emergency doctor.

“I like the unknown, I like the variety of it,” he said. “Every innings was a new day.”

He received a master’s degree in health administration from the University of Michigan and completed his residency in emergency medicine at the Henry Ford Health System in Detroit, before being admitted to the Grady Memorial as chief of emergency medicine.