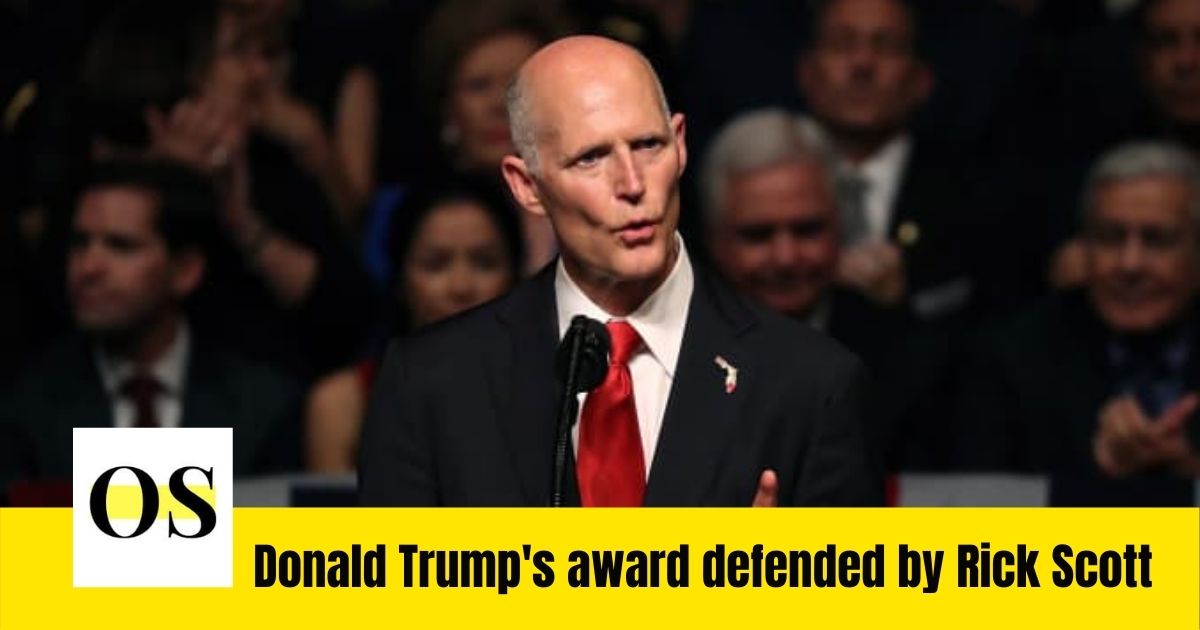 Earlier this month, former President Donald Trump was praised by Sen. Rick Scott so much that Rick wanted to invent an award for him. Rick defended his team’s decision by saying it was a way to “recognize people”.

Senator Scott offered Trump an award under the auspices of the National Republican Senatorial Committee, the Senate campaign arm he chairs in the 2022 cycle.

Moreover, Sen. Rick Scott also told anchor Jacqueline Alemany the Washington Post Power Up that he had a habit of giving out medals as Governor, including to “entrepreneurs” and 15,000 veterans, and the award to the former President was simply an extension of that generosity.

“We’re going to be giving this award out to other individuals, men, and women,” Sen. Scott promised.

Rick Scott also said he and his team at the NRSC put the award together.

“Since I got up here, I’ve been asking, how can I recognize people,” Scott said. “I’m a business guy and I know people appreciate being recognized.”

“I don’t agree with the things the President said on Saturday night,” Scott asserted, without specifically delineating which things beyond the widely reported blast on McConnell.

When asked if he would have withheld the award if he was planning to award it after the Saturday night speech, Scott was coy.

“Well, my scheduled meeting with him was on Friday, so that’s why we did it then,” Scott said. “Who knows? That’s a hypothetical.”

Scott disclaimed the idea of a “civil war” within the Republican Party, saying “that’s all interesting stuff in D.C.”

Scott acknowledged as he has previously, that President Joe Biden is the “duly elected President,” throwing perfunctory shade at Trump in an aside.

“I’ve been able to win my elections. I’m sure it’s frustrating when you don’t win your election. But we have a new President,” Scott counseled.

Sen. Rick Scott also said he advised Trump to stay out of open primaries and not work against incumbents like Sen. John Thune of South Dakota.

“What I have asked is, I would like him in open primaries not to be involved,” Scott said, noting his own “very tough primary in 2010” as a reason the Senator has “elected to stay out of primaries.”

“When I give advice to somebody, I don’t necessarily expect them to take it,” Scott allowed.

The Senator also suggested that 2024 may not be a slam-dunk for Trump, even as he’s not looking to run himself.

“That’s a choice he’ll make,” Scott said. “There are lots of my colleagues, it looks like they’re interested in doing it.”

Scott vowed to “support the Republican nominee,” regardless of who it is. He didn’t even rule out backing Gov. Ron DeSantis should he be on the ticket, though he couldn’t mention his successor’s name.

“I’m appreciative that I live in a state where our businesses are open and our schools are open, and I’m going to support the Republican nominee, no matter who it is.”