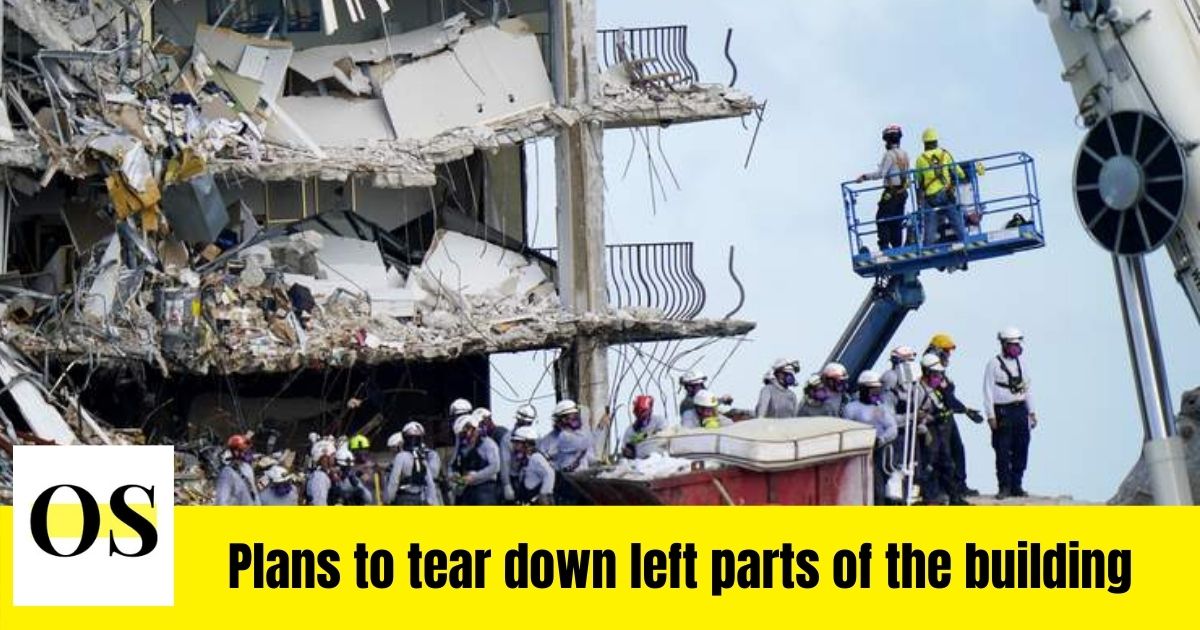 SURFSIDE, Fla. – After a 15-hour delay in the search for survivors due to concerns about the structure’s stability, Florida officials are working on plans to demolish what’s left of a partially collapsed oceanfront condominium building.

Officials said they had begun planning for the likely demolition of the surviving structure after rescue efforts restarted Thursday evening, even as rescuers continued to comb the rubble pile beneath it.

Engineers are looking at several techniques for the demolition and how to proceed “to make the site safe for ongoing rescue operations,” according to Scott Nacheman, a FEMA buildings specialist.

According to Nacheman, if the building collapses, the rescue mission will initially be slowed. However, he said that demolishing the structure will create a safer working environment, allowing more people to be on the job and speeding up the process.

He predicted that officials would take weeks to schedule the demolition.

On Friday morning, a dozen workmen were seen digging through the pile, which had grown to around 20 feet (6 meters), down from more than 10 feet (3 meters) a week ago. Workers climbed into the mound and began removing smaller rubble by hand, using cranes to lift heavier objects from the pile once more.

Mayor Daniella Levine Cava of Miami-Dade County said the demolition decision must be taken “very carefully and deliberately,” taking into account the potential effects on the debris pile and the search.

Crews discovered growing fissures and up to a foot of movement in a big column early Thursday, and the rescue work was suspended.

Cava said work resumed just before 5 p.m. after structural experts inspected the site, and firemen were “very, really excited out there.”

“We will continue to search diligently in the portions of the collapse that we now have access to, as we have done all along,” she said.

The work stoppage had shattered hopes of discovering anyone alive in the wreckage a week after the tower fell. The halt, according to Surfside Mayor Charles Burkett, is concerning because “minutes and hours count, lives are at stake.”

President Joe Biden and first lady Jill Biden paid a visit to the devastated village on the same day that rescue operations were temporarily halted.

The 12-story Champlain Towers South condominium collapsed, killing at least 18 individuals and leaving 145 more missing. Since the initial hours after the collapse, no one has been saved.

During a press conference, Biden remarked, “This is life and death.” “We can accomplish it; simply doing what needs to be done by everyone makes a difference.”

“There will be a lot of anguish, fear, and suffering in the days and months ahead, as well as the need for psychological help,” he said. “As a result, we’re not leaving.”

Marcus Guara, his wife Anaely Rodriguez, and their two children, Lucia Guara, 10, and Emma Guara, 4, died along with their cousin Peter Milián. Milián said he understood why the rescue efforts had to be put on hold for the time being.

“I mean, they’ve done everything they can,” says the narrator. However, we have faith in the folks on the ground. And, clearly, they must act in the best interests of their people, right? Because it’s a risky situation,” he explained.

Biden tried to console family members at a private meeting with them, drawing on his own grieving experiences. Biden’s first wife and infant girl were killed in a car accident, and he later died of brain cancer as an adult son.

. In a video posted on Instagram by Jacqueline Patoka, a woman who was close to a couple and their daughter who are still missing, he stated, “I just wish there was something I could do to lessen the suffering.”

Biden expressed a desire to swap places with a long-lost or missing loved one. He said, “The waiting, the waiting is horrible.”

The cause of the collapse is being looked into. The building’s ground-floor pool deck was resting on a concrete slab that had “major structural damage” and required extensive repairs, according to a 2018 engineering report. The parking garage also had “abundant cracking” of concrete columns, beams, and walls, according to the report.

The president of the board of directors wrote a letter to residents just two months before the building was demolished, stating that structural problems identified in the 2018 inspection had “gotten significantly worse” and that major repairs would cost at least $15.5 million. The structure abruptly fell last Thursday, with bids for the work still pending.