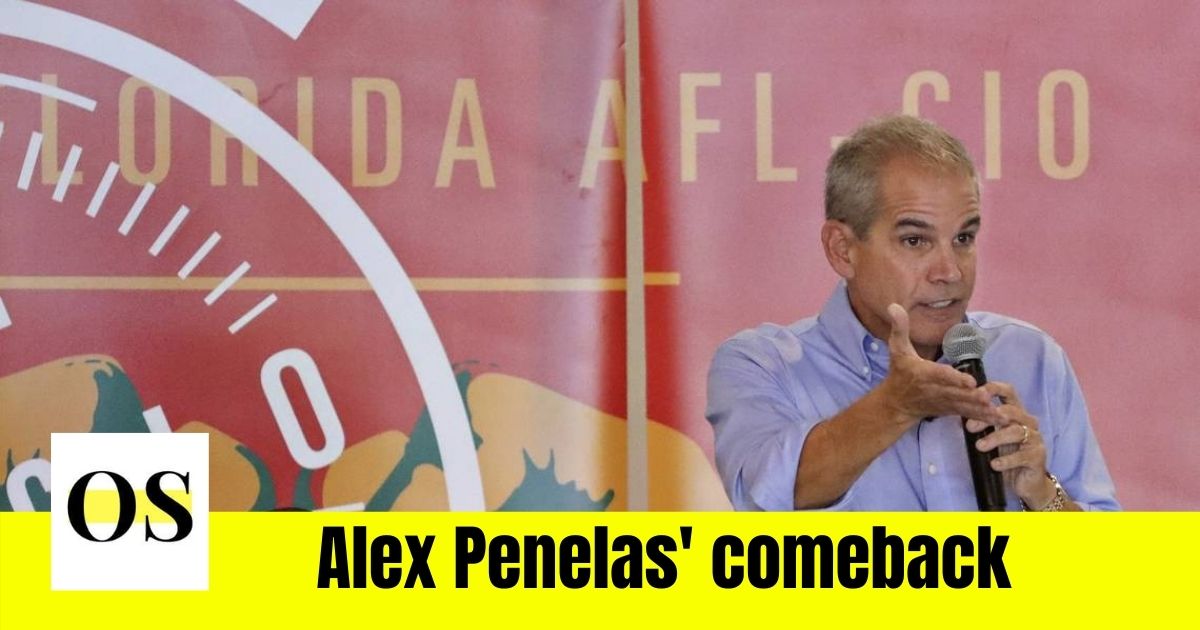 Once the golden boy of the Democratic Party in Florida, Alex Penelas fell out of favor and left the public eye 16 years ago. Now he’s running for his old job as mayor in the state’s biggest county.

In 2004, Alex Penelas was wrapping up his eighth year as Miami-Dade County mayor and running for U.S. Senate, seeking to replace Bob Graham, who was retiring.

Penelas, who had never lost a campaign since entering politics nearly two decades earlier, seemed a shoo-in. The son of Cuban refugees, he appealed to Hispanic voters and donors. He had charisma and good looks — People magazine named him sexiest politician in 1999 — and he could point to key accomplishments, including universal prekindergarten education and more money for local transit.

But Penelas, a Democrat, also was dogged by allegations of corruption and concerns that he was too close to lobbyists and special interests. Some party loyalists hadn’t forgiven him for his criticism of the Clinton administration’s handling of Elian Gonzalez, the shipwrecked Cuban boy caught in a tug-of-war between Miami’s exile community and Fidel Castro, and for what they perceived as Penelas’ tepid support of Al Gore during the 2000 presidential campaign.

That August, Penelas failed to advance beyond the Democratic primary for the 2004 Senate race. Penelas, then 43, threw himself into fatherhood, launched a new career as a real estate investor and generally stayed out of the political spotlight for 15 years until he announced in October he would run again for his old job as Miami-Dade mayor.

“The best thing that ever happened to me was losing that election,” he says. “I was burned out. I was ready for a break, and my family really needed me at home.”

Penelas, now 58, is the son of a Cuban labor leader who was anti-communist and condemned to death by Castro. The elder Penelas sought sanctuary at the Costa Rican embassy in Havana as Penelas’ mother and two older brothers fled to Miami. In 1961, his father joined them in Miami, where Penelas was born later that year.

“I was actually a promise because they didn’t think they’d see each other again — if in fact they did, they’d have another child,” he says.

His father worked various jobs, including as a tomato picker and hotel waiter. His mother worked as a seamstress and hotel housekeeper. Penelas, who speaks both English and Spanish, studied political science at Biscayne College, now St. Thomas University, and got his law degree from the University of Miami in 1985.

By his 30th birthday, he’d become a rising star in the local Democratic Party. At 25, he was the youngest person ever elected to the Hialeah City Council. Three years later, he won election to the Miami-Dade County Commission, also as the youngest ever.

In 1996, Miami-Dade voters decided to create a new position of executive mayor and elected Penelas to the first of two four-year terms. “When you’re that young, everyone says, ‘No, no, no. Wait your turn.’ I always pooh-poohed that,” Penelas says.

His most difficult test came in November 1999, after a boy, Elian Gonzalez, was found clinging to an inner tube off the coast of South Florida. A small boat carrying Gonzalez and a dozen other Cuban refugees had capsized, drowning most on board, including his mother and stepfather.

The boy’s father, who remained in Cuba, and the Castro government demanded that the U.S. return Gonzalez, claiming he’d been taken from the country illegally, but his relatives in Miami refused to give him up. Meanwhile, U.S. immigration policy dictated that Gonzalez should be repatriated unless he went to court and received political asylum.

As anti-Castro protesters gathered in Little Havana to oppose the boy’s repatriation, Penelas announced that local police would have nothing to do with the child’s removal and said he’d hold the Clinton administration responsible “if blood is shed on the streets,” though he later backtracked to say local police would “maintain order” regardless of the administration’s decision.

The seven-month saga ended with federal agents taking Gonzalez at gunpoint from the home of his Miami relatives and sending him back to Cuba. Penelas says he was right — and even prescient — in breaking with the Clinton administration over local support for federal immigration enforcement.

“In many ways, I think Elian was the first example of a sanctuary cities case,” he says. “I was raked over the coals for saying Miami-Dade County police would not pull the child out of the house, that they’re not going to serve as enforcement officials. Today, when a local elected official says something like that, they are widely applauded.”

While his stance played well with Miami’s Cuban exile community, Democrat loyalists accused Penelas of not being a team player, and the 2000 presidential election and re-count only widened the rift.

After securing his second mayoral term in September 2000, Penelas took a trade mission trip to Spain and made no campaign appearances for Gore in the run-up to the general election. When the Miami-Dade canvassing board decided to stop manually counting ballots amid protests from Republicans, Penelas did not intervene.

George W. Bush ultimately was declared the winner in Florida, and four years later, as Penelas ran for the U.S. Senate, Gore told the Miami Herald that Penelas was the “single most treacherous and dishonest person” he’d dealt with in 2000. Penelas maintained that he was “proud to support” Gore’s campaign and did not have the authority to keep the re-count going.

He says he’s on good terms with the Democratic Party these days, adding, “They’ve tried to recruit me at least four times to run for Congress, and they always call for money.”