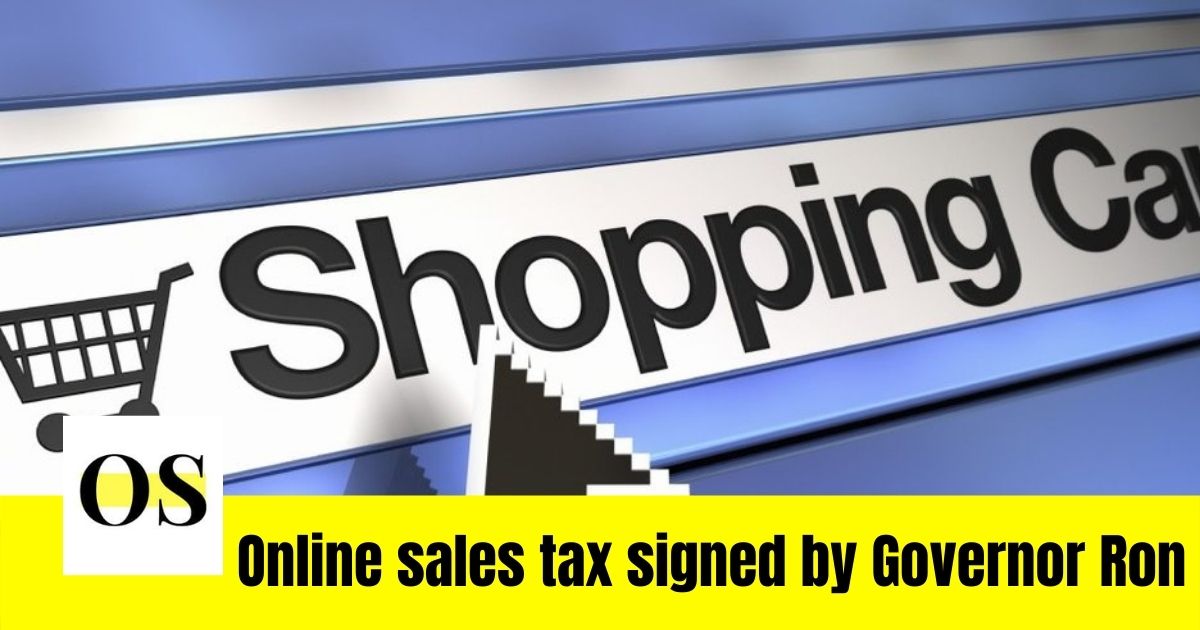 The online sales tax bill has been signed by Governor Ron DeSantis into law. This answers the question of whether he would act on the bill or not.

An estimated $1 billion in revenue would come from the new enforcement of sales taxes technically already owed on purchases Floridians make from out-of-state sellers, but which few Floridians pay.

DeSantis had until midnight to sign or veto the bill into law or else it would have gone into effect without his signature. Lawmakers sent him the bill on April 12. He waited until one hour left in the day Monday to send the alert that he had signed the measure.

The Governor’s budget recommendations for the 2021-22 fiscal year did not include e-fairness legislation.

When asked in January about fully implementing the online sales tax, the Governor told reporters, “There are no tax increases in our budget. We’re not going to do that.”

When DeSantis did sign the bill, it was announced at 11:23 p.m. 37 minutes before the bill would have become law without his signature. The Republican announced his action in a news release about signing five different and unrelated bills and offering no comment on the legislation.

While the proposal was widely supported by business groups, DeSantis’ signature came with far less fanfare than when he appeared Monday morning in Polk County to sign a controversial bill cracking down on violent protests.

State revenue estimators predict collecting sales tax online at the point of sale will generate a $973.6-million boost in general revenue funds in the 2021-2022 fiscal year and a $1.08 billion boost each year afterward.

Yet supporters contend the bill is not a tax increase since people technically owe the state the money already. Consumers are currently supposed to send sales taxes directly to the Department of Financial Services in a separate check. Under the new plan, out-of-state sellers would begin collecting those taxes for consumers, as in a conventional purchase.

Brick-and-mortar retailers, who have complained about the inequity of online sellers evading tax collection, cheered the legislation.

“Through the passage of SB 50, Gov. DeSantis and legislative leaders have acknowledged the pivotal role that the retail industry plays in supporting Florida’s families,” said Scott Shalley, president and CEO of the Florida Retail Federation.

“With this measure signed into law, all businesses can compete on a level playing field and continue to support the 2.7 million Floridians who work in the retail industry. Thank you, Governor Ron DeSantis, for your leadership and for providing meaningful relief to Florida retail businesses.”

Regardless, Republican critics like Rep. Anthony Sabatini and Anthony Rodriguez and a slim majority of Democrats who had backed the measure until it got tied to restocking the unemployment trust fund have tried to portray the bill as a tax increase.

However, Democratic Leader Gary Farmer raised an objection, arguing it was a tax increase that required a supermajority vote but was overruled.

Moreover, as the bill was written in January, the additional revenue would have gone into general revenue, but the plan is now “revenue neutral.” Republican legislative leadership’s latest deal includes using the additional revenue to replenish the Unemployment Compensation Trust Fund to prevent a tax hike on businesses.

With the trust depleted last year, unemployment taxes on employees jumped from $7 per employee last year to $49 this year. If nothing changes, that rate could jump to $87 next year.

Furthermore, a measure added in an amendment approved this month would use the additional revenue to lower commercial rent taxes once the unemployment trust fund is refilled. Once the trust is restored to $4.07 billion, the statute now calls for the rent tax to drop from 5.5% to 2%, which will cut taxes by approximately $1 billion annually.

Proponents for e-fairness legislation, including the bill’s House sponsors, Reps. Chuck Clemons and Chip LaMarca, argue it will level the playing field for local and brick-and-mortar businesses, who compete against online businesses who don’t list the tax in their final sale total.

The Florida Chamber of Commerce lauded the measure. Chamber President and CEO Mark Wilson thanked the Governor for his leadership in relieving Florida’s businesses.

“Gov. DeSantis’ signature reiterates his commitment to relaunching Florida’s economy and helping Florida job creators recover from a once in a century pandemic,” he said.

“With this measure signed into law, all businesses can compete on a level playing field and continue to support the 2.7 million Floridians who work in the retail industry,” he said.

Florida TaxWatch has been pushing for e-fairness legislation for years. TaxWatch President and CEO Dominic Calabro called the measure a “Taxpayer Penalty Relief Endeavor” that also would alleviate the effects of COVID-19 on businesses.

“The combination of each of these provisions will certainly have significant and lasting benefits on Florida’s fiscal landscape, leading to a more prosperous future for all,” he said.

“No longer will out-of-state retailers, who don’t contribute anything to the betterment of our communities, have an unfair advantage over our local businesses who are not only part of our local communities but who have a vested interest in them and their success,” he said.

Democrats support the underlying e-fairness legislation but opposed directing those funds to help businesses, arguing it would lower taxes on businesses on the backs of consumers. They instead supported using the revenue to increase unemployment benefits.

If DeSantis had vetoed the bill, the Legislature in theory would have had the votes to overturn his decision. It passed the House by a 93-24 vote, and the Senate by a 27-12, indicating enough support in both chambers to reach the two-thirds threshold to overturn a veto.

Of the 45 states that charge sales taxes, only Florida and Missouri haven’t forced them on online sales since a 2018 U.S. Supreme Court ruling cleared that path. Florida will join the rest when the law goes into effect in July.