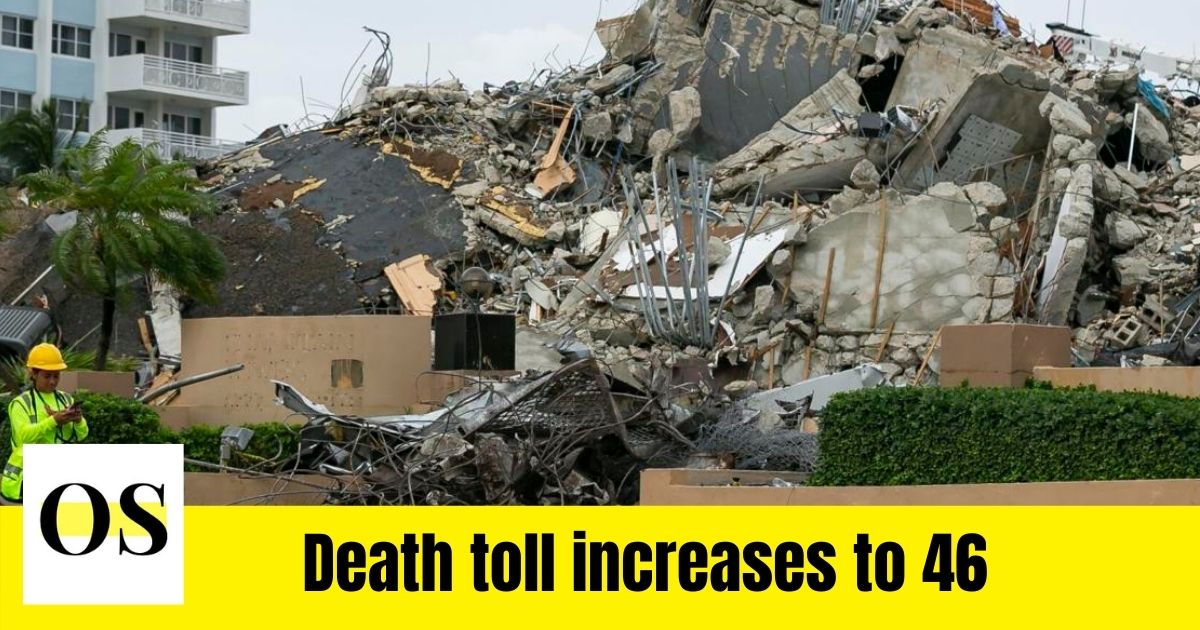 SURFSIDE, Fla. – On Wednesday, the search for victims of a Miami-area high-rise condominium collapse entered its 14th day, as workers unearthed 10 more bodies from the rubble and officials grew increasingly pessimistic about the chances of finding anyone alive.

In a private briefing Wednesday morning, Miami-Dade Assistant Fire Chief Raide Jadallah informed family members of the discovery of the additional bodies and human remains. The death toll has now risen to 46.

The latest recovery reflects what rescue officials have predicted will be a faster pace of activity throughout the debris field after the condo building’s last half was dismantled Sunday night.

Crews “removed a major portion of the pile,” according to Jadallah. “They were able to investigate a number of different areas.”

Jadallah also shared the depressing news that no fresh “voids” had been identified in the places that were made accessible for the first time following the demolition. Rescuers had hoped to uncover additional pockets where survivors might be hiding.

Nonetheless, Jadallah informed relatives that the effort is still in search and rescue mode and has not yet switched to recovery mode.

Since the early hours after the building fell on June 24, when many of its tenants were sleeping, no one has been recovered from the site.

On Tuesday, workers dug through pulverized concrete at the site of the former Champlain Towers South building in Surfside, filling buckets that were then transferred down a line to be emptied and returned.

The footage, released Tuesday by the Miami-Dade County Fire Rescue Department, provided an up-close view at the search as eight more deaths were reported — the highest for a single day since the search began — until Wednesday. The attempt was further hampered by rain and wind from Tropical Storm Elsa.

“Unfortunately, we are not seeing anything positive,” county fire chief Alan Cominsky said Tuesday night, alluding to rescuers’ failure to uncover any open spots among the rubble mounds where additional survivors might be found.

Mayor Daniella Levine Cava of Miami-Dade said Tuesday that the relatives of the missing were expecting “tragic loss” news. President Joe Biden, who was in the area last week, called on Tuesday to express his continued support, according to her.

“I believe that when it comes time to move on to the next step, everyone will be ready,” she stated.

Reporters had their first look at the scene on Tuesday, albeit it was limited to the section of the structure that workmen demolished Sunday after the initial collapse left it standing but extremely unstable. A 30-foot (9-meter) high pile of shattered concrete and twisted steel spanned almost half the length of a football field. Backhoes removed rubble from the mound, blocking any view of the search activity.

Elsa’s severe weather hampered search efforts to some extent. Early Tuesday, rescuers were forced to take a two-hour break due to lightning, according to Jadallah. Winds of 20 miles per hour (32 kilometers per hour) with greater gusts impeded efforts to transport heavy debris with cranes, according to officials.

According to Cominsky, crews have cleared 124 tons (112 metric tons) of debris from the site. According to officials, the debris was being sorted and stored in a warehouse as possible evidence in the investigation into why the building collapsed.