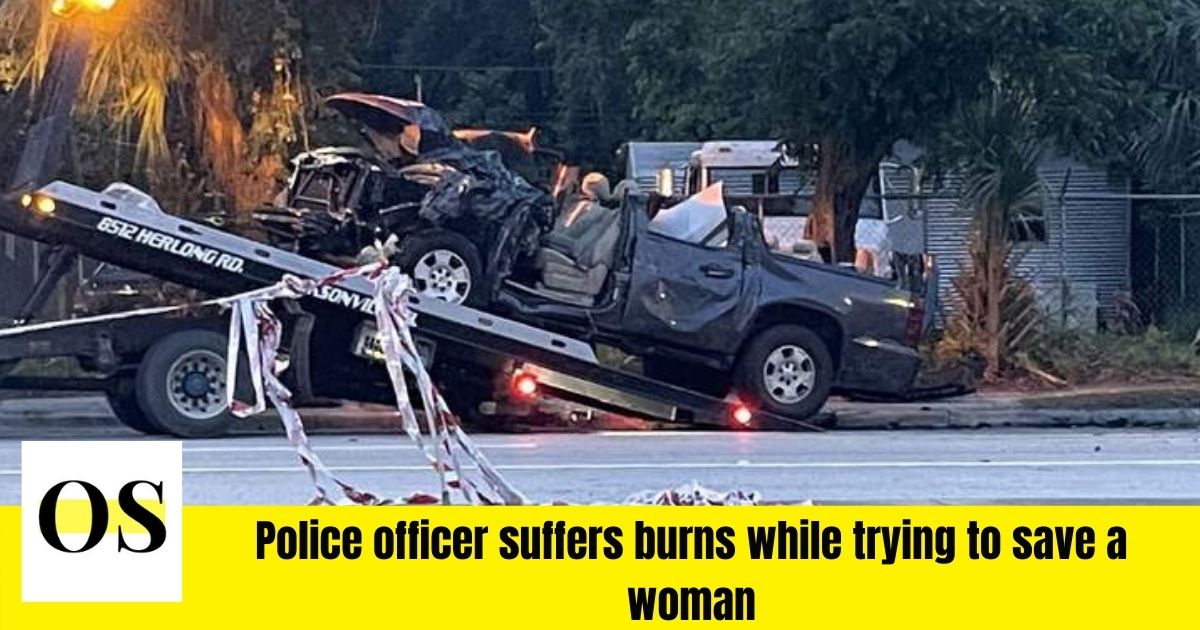 JACKSONVILLE, Fla. – According to the Jacksonville Sheriff’s Office, a woman died in an automobile accident early Sunday morning in Northwest Jacksonville, and five others were injured, including a police officer.

A man and three women were in a BMW heading south on Edgewood Avenue North around 2 a.m. when the vehicle lost control, jumped the median near Shenandoah Avenue, crashed with a Chevrolet Suburban, and caught fire, according to Lt. Rich Buoye of the JSO Traffic Homicide Unit.

While attempting to help her, a JSO officer was burned on his head and arms, according to Buoye.

“My heart breaks for the officers and their families,” Buoye said. “He’s a hero,” says the speaker. He tried everything in his power to save this woman. He was able to rescue three. He couldn’t seem to get the fourth one out.

At the site, paramedics treated the officer’s injuries, which JSO described as mild.

“I can only imagine how this officer feels, attempting and failing to pull this woman out of the car, getting burned, and then witnessing her die right in front of his eyes,” Buoye added. “It’s a disaster. It’s a disaster.”

According to Buoye, the driver of the Chevrolet was brought to the hospital with non-life threatening injuries.

Three BMW survivors, according to police, arrived at a hospital on their own with minor injuries.

Following the incident, all lanes of Edgewood Avenue North were closed until around 7 a.m.

Excessive speed, according to the Sheriff’s Office, could be a contributing factor.

All drivers were issued a warning by Buoye.

“There’s nothing we’re doing out here that’s so vital that you have to rush to get there and drive yourself insane,” he remarked.